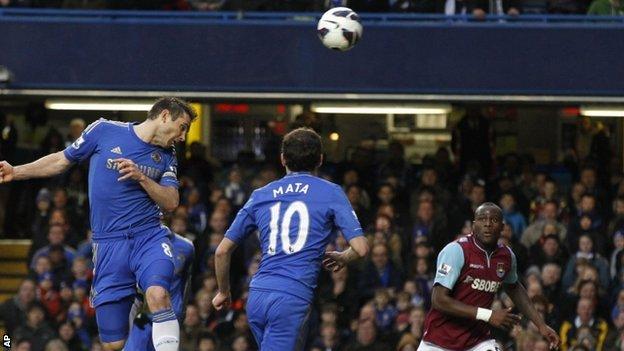 Frank Lampard scored his 200th goal for Chelsea who moved into third place with a win over West Ham.

The Blues dominated the match at Stamford Bridge and took the lead in the first half when Lampard nodded in Eden Hazard's through ball.

Hazard added a second after the break when he cut in from the right and arrowed a strike past the reach of Hammers goalkeeper Jussi Jaaskelainen.

Chelsea should have won by more, but Demba Ba wasted several chances.

Ba found himself in a one-on-one with Jaaskelainen. Luckily for the former Newcastle striker, Chelsea's midfielders bailed him out with outstanding individual performances.

The veteran of that pack, Lampard, will steal the headlines, but it was Hazard who was the star performer.

The Belgium international, who signed from Lille for about £32million last summer, was the catalyst for many of the Blues' attacks and produced a sublime goal.

Hazard's first telling contribution saw him fire in a wicked shot that West Ham's Finnish keeper could only fist back into play.

The ball eventually came back to Hazard on the edge of the area and his lofted pass was met with a firm header by Lampard. The England international is now only two goals away from equalling Bobby Tambling's club record tally.

Lampard scored his goal at the end where the away fans were sitting. He celebrated with substitute John Terry, who was warming up in that section of the ground, as objects were thrown from the crowd in their direction.

The Metropolitan Police later confirmed they were investigating incidents of coin throwing, but that no arrests had been made.

Blues manager Rafael Benitez handed Victor Moses a start, and the former Wigan player narrowly failed to add to the home side's lead when his shot drifted wide. Central defender David Luiz also made forays forward, forcing a low save from Jaaskelainen, before striking a spectacular volley that screamed past the bar.

Chelsea finally got their second after the break, when Hazard teased his markers on the right, played a one-two with Juan Mata, before racing into the area and firing low inside the Hammers near post. It was a strike befitting of his classy performance.

Hazard could have added to his tally but was denied by Jaaskelainen and a block from Joey O'Brien.

West Ham did not cause much worry in the Chelsea defence. They did have the ball in the net when Andy Carroll slotted in after winning a jostle with Luiz, but referee Michael Oliver penalised the ex-Newcastle man for pushing the Brazilian.

Carroll won several aerial battles in the area but his headers were tame. It was not until the final five minutes that the Hammers created their best chance when substitute Carlton Cole forced Petr Cech to dive low to keep out his poked effort.

Chelsea's 16th win of the season moves them a point above Tottenham, who earlier lost to Fulham, and to within four points of second-placed Manchester City.

Benitez's side have a run of six games in two weeks when they resume after the international break on 30 March, but recent performances suggest they have the personnel to cope.

"It was a good game, a great results, Frank scored his 200th, the team is third so it's a great week and a good moment for us.

"It is a long race, we have to carry on and win our next game and see what others do.

"Demba Ba is a great finisher and today it was not his day.

"We will approach it one game at a time. We have to relax now and not get any injuries after the international break."

"Sometimes, you come to places like this and you have to hope the top players are not on song, but young Eden Hazard made life extremely difficult for us. The quality of the players in that area, including Juan Mata, with the support of Frank Lampard, was too much for us on the day.

"We had a couple of chances and you have to try and put them in the net. We did not do that and we have suffered for it. They deserved to win and we have to accept that. It is not going to define our season, beating them once is enough, beating them again would just be greedy.

"Andy Carroll had a couple of chances, and we would expect him to hit the target. If we get to 2-1, they might panic. The free-kick given for the disallowed goal on David Luiz was soft.

"Their second was brilliant. Hazard's trickery, pace and quality of finishing, the defenders could not cope with it.

"We would like six points and get to 39 points as quick as we can."