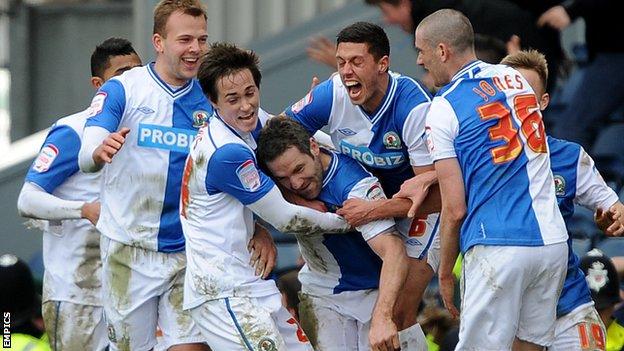 David Dunn scored in the fifth minute of stoppage time to salvage a point for Blackburn in the east Lancashire derby against 10-man Burnley.

The Clarets took the lead when Jason Shackell followed up after his own header rebounded off the woodwork from Ross Wallace's free-kick.

Burnley were then reduced to 10 when Ben Mee was shown a second yellow for a late tackle on Grant Hanley.

With only a minute left, Dunn drove in the equaliser for his struggling side.

The Clarets have not beaten Blackburn in more than 34 years. The last time Burnley overcame their local rivals was a 2-1 win on 14 April 1979.

The Blackburn veteran, his team-mates and the home fans celebrated wildly as the goal stopped Michael Appleton's side slumping to their fourth successive defeat. More importantly, they are now four points clear of the relegation zone.

Before the game, Burnley manager Sean Dyche had spoken of the "massive expectations" required from his side and it was the Clarets who started the brighter, as Alex Kacaniklic's lofted cross found an unmarked Charlie Austin, whose acrobatic volley flew high over the bar.

Soon afterwards, the game was interrupted as referee Andy D'Urso was forced to halt play as a chicken was thrown onto the pitch by Rovers supporters.

A quiet Jordan Rhodes, who has scored 20 league goals since joining Blackburn in a £8m move last summer, then saw a penalty appeal waved away after it had looked like Michael Duff had used a high boot.

At the other end, Martin Paterson had a volley expertly tipped over by Jake Kean, before an Austin effort went high into the Burnley supporters behind the goal.

The opener came with 32 minutes on the clock, the lively Paterson was brought down by Hanley 30 yards out. Wallace floated over the resultant free-kick to find Shackell, whose header rebounded off the post and fortuitously fell to his right boot to thunder home beyond Kean.

Moments later Wallace looked to have doubled Burnley's lead, but his long-range free-kick clipped the post to safety.

Rovers' best and only chance of the half came from Dunn, whose dipping half-volley went narrowly over the bar.

After the break, Rhodes managed to spin away from his marker to open up a bit of space only for his strike to go over.

Mee was then shown a second yellow card after catching Hanley late, before Rhodes saw a header go narrowly wide at the other end.

Blackburn piled on the pressure in the final few minutes and it was local boy Dunn who broke Clarets fans hearts as he slotted in, from an offside position according to Dyche, at the far post with just one minute of added time remaining.

"I hope it's damaging to Burnley and I hope it feels like it's the worst result they have ever had.

"I thought for the effort in the second half, when Burnley lost their discipline and we kept ours, we stayed patient and luckily we kept Dunny [David Dunn] on the pitch and he did the job for us.

"Hopefully that'll be a catalyst for the next few games now. I'm delighted for David Dunn and everyone else in the dressing room but both sides didn't create much over the 90 minutes."

"It feels like a result that's been taken away from us by an official's decision. We deserved all three points, regardless if it's offside or not.

"We did enough to win the game but a goal that's two yards offside has cost us. I've seen it again and it's clear. What can you do?

"I don't think Blackburn hardly had a chance in the game. I'm very proud of the players and I thought we were excellent. We were creating chances and we never looked like we were in trouble even with the sending off.

"I thought we had a real control of the game. I was pleased with the endeavour with the players and we want to build on that. We've got some good players and they're improving overall."