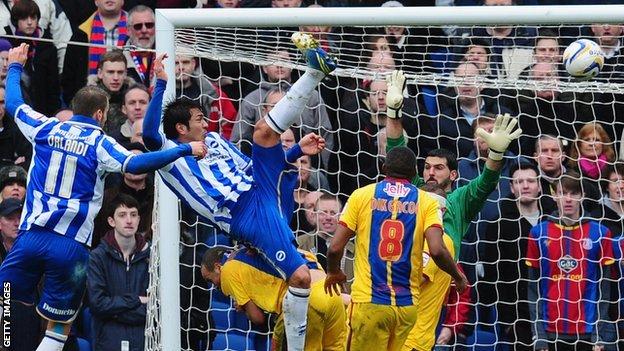 Brighton boosted their hopes of clinching a place in the play-offs with a win over rivals Crystal Palace.

The Seagulls struck twice in three minutes before half-time when Leonardo Ulloa headed in the opener before David Lopez curled in a 20-yard free-kick.

Ulloa volleyed in an exquisite third in the 50th minute to kill off the game.

Palace, who would have moved second with a win, were almost gifted a lead by Brighton's Matthew Upson but his header was saved by Tomasz Kuszczak.

Brighton are unbeaten in the Championship at the Amex in 2013, taking 16 points from a possible 18.

Brighton's win was their first in four games and first at home to Palace in 25 years. It moved Gus Poyet's side level on points with sixth-placed Leicester City - only trailing by goal difference.

The visitors started the brighter with winger Wilfried Zaha causing plenty of problems.

The England international teed up opportunities for defender Jonathan Parr, who shot straight at Brighton keeper Kuszczak from close range, and the Championship's leading scorer Glenn Murray, who headed just off target.

Kuszczak's best save came when he clawed out Upson's misplaced clearance moments before the game was turned on its head just before the break when Will Buckley's floated cross was bundled in at the back post by Ulloa.

Two minutes later, Kagisho Dikgacoi's rash challenge on Buckley on the edge of the box was perfectly punished when Lopez's free-kick crashed in off the underside of the crossbar.

Eagles manager Ian Holloway made a double substitution at half-time to try to salvage a result - throwing on veteran striker Kevin Phillips, 39, along with midfielder Andre Moritz.

But the game was up five minutes later when Brighton added a beautifully crafted third.

Buckley picked out Andrea Orlandi and his header dropped into the path of Ulloa, who smashed in a volley from six yards.

The Argentine striker went close to a hat-trick with 15 minutes to go but his shot was well saved by compatriot Julian Speroni, who also kept out Buckley's follow-up.

"Playing in this division is difficult and it can be tough even when you're the best team on the pitch. What a day - one to remember.

"Leonardo Ulloa is making the difference. I am pleased for him, if he had been here for the first six months I can't imagine where we would be right now.

"What a prize for him, scoring two goals against our biggest rivals. I am very happy for him."

"With the team I picked, I expected us to cause them a few more problems defensively and create a few more chances but unfortunately it didn't pan out that way.

"We needed to come out all guns blazing in the second half but we went out with a powderpuff really."