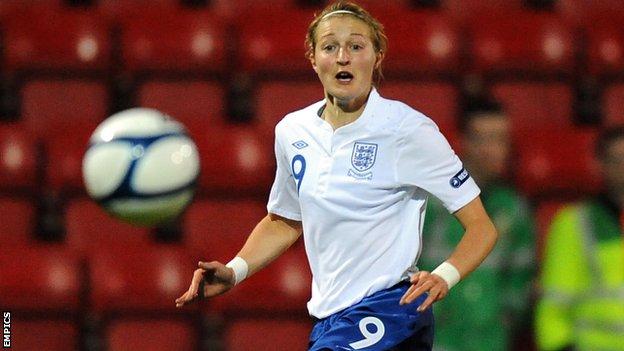 England will face Canada in the Cyprus Cup final - if they beat New Zealand in their final Group A game on Monday.

Canada are through to the final after clinching top spot in Group B.

England coach Hope Powell said: "New Zealand are a very fit, high energy team and are dangerous opponents who will give us a real test."

Scotland, whose thrilling 4-4 draw with England was the tie of the tournament to date, must take a point off Italy to avoid finishing bottom of Group A.

In Group C, which is effectively an ancillary competition between lower ranked teams, Northern Ireland will finish bottom unless they beat South Africa.

If rankings are anything to go by then England, 13 places higher than New Zealand at eighth in the world, should reach the final.

But Powell, whose team had to come from behind to beat the Football Ferns at the 2011 World Cup, expects a tough test.

She said: "It would be good to get to the final again, but to do that we will have to be better than we were against Scotland on Friday.

"We didn't play to the standard we achieved against Italy, but if we are at our best on Monday then we can hopefully go through to the final."

The Canadians have won the competition a record three times, though in 2009 England beat them in the final to lift the trophy for the only time.

England beat Italy 4-2 before Friday's draw with Scotland, who lost 1-0 in their opener against New Zealand and now need a result against the Italians.

"But we are improving all the time and this will be another good test for us and another great experience for the players.

"We can take confidence from our performance against England and it would be lovely to end the tournament with a victory."

Northern Ireland and South Africa are both pointless going into their final Group C fixture, but Ireland's goal difference is inferior so victory is imperative.

"We lost 2-0 to them here last year, but both goals came late and one of them was a penalty so we ran them pretty close.

"We'll have a young and very inexperienced team, but the girls have acquitted themselves pretty well in this tournament and we'll give it our best shot."