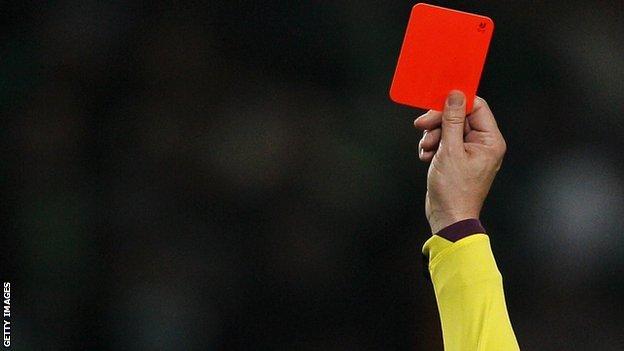 A Ryman Premier League game between Wingate & Finchley and Thurrock has been abandoned after five players from the home side were shown red cards.

Visitors Thurrock had a 1-0 lead over their relegation rivals when the match was called off in the 85th minute.

The Football Association rules state that matches cannot continue if one side has only six players.

A spokesman for the FA said it would have to wait for the referee's report before deciding whether to take action.

There will be a further discussion to decide whether the match will be replayed or whether Thurrock will be awarded the win.

"It's fair to say it wasn't a particularly good spectacle and it was just very strange," Thurrock midfielder Ben Smith told BBC Sport.

"If you were watching it, there weren't really any bad tackles. Initially I saw sympathy for them but then they were masters of their own downfall.

"They hardly had any players and we were 1-0 up so you'd like to think we'd have seen out the last five minutes."

Before Sunday's match, Thurrock stood second bottom in the league on 24 points while Wingate & Finchley are 18th but just seven points ahead.

In 2002, Sheffield United's first division match against West Bromwich Albion was abandoned on 82 minutes after the Blades had three players sent off and a further two injured, leaving the home side with only six players left on the field.