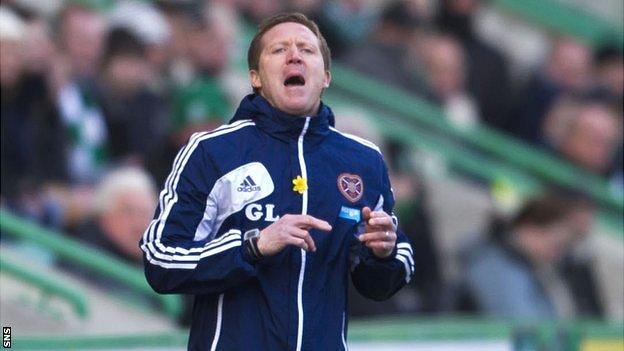 Gary Locke hopes to remain at Hearts in some sort of coaching capacity when the club's board decides who their new manager should be.

Locke, in temporary charge of the first team, watched Hearts leave the home of rivals Hibernian with a point after their

"If they were to give me the job to the end of the season, great," he said.

"If they don't, I'm first-team coach and love working here. If it's a new set-up, hopefully I can be part of it."

But, for the time being, Locke has been given the responsibility of lifting Hearts up the Scottish Premier League table and preparing them for the Scottish Communities League Cup final against St Mirren next Sunday.

"The club's been great. If anything happens I am sure that myself and Darren [Murray] will be the first to know," he continued.

"At the moment we will just try to prepare the players the same as we have done the last three games.

"If someone new comes in, then great. We look forward to the final next week."

Reaction to the Edinburgh derby itself will centre on the decision by referee Euan Norris and his linesman not to award a goal for Hibs striker Leigh Griffiths' 25-yard free-kick that crashed off the crossbar and crossed the goalline by a few feet.

Asked for his views on whether he thought the goal should have stood, Locke said: "It was a great strike. I'd need to see it again.

"At the time I did think it was in. Maybe that's a bit of luck we have not had this season."

And he added: "It wasn't a brilliant game. There wasn't a lot of quality but when you see the pitch, it wasn't conducive to getting the ball down and passing it.

"Both teams gave everything. I was pleased with our effort and commitment. It was first class.

"But we are looking for a bit more in the final third of the pitch. Maybe we are not getting enough people in the box.

"All in all I thought a draw was a fair result.

Whether the new manager is Houston, Locke or another applicant, he will be working with a young squad as the club squeezes its playing budget as part of its range of cost-cutting measures.

Nineteen-year-old Brad McKay is now in with a chance of playing in the cup final at Hampden after he replaced fellow teenager Fraser Mullen when he injured his ankle at Easter Road.

"I had every confidence in him and I thought he acquitted himself really well," said Locke of the Hearts substitute.

"He had a great clearance at the end.

"The future of the club is really bright. We've got all these young kids coming through.

"If you come in and you take your opportunity you have a chance, so Brad will be in contention."