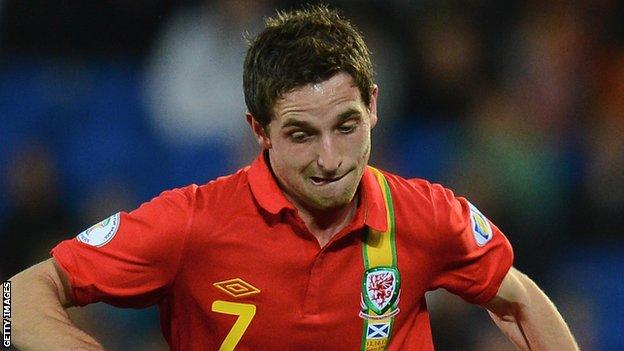 Liverpool midfielder Joe Allen has been ruled out of the Wales squad for this month's 2014 World Cup qualifiers.

He has been suffering with a shoulder injury and his club manager, Brendan Rodgers, earlier confirmed that Allen needs surgery.

Leeds United striker Steve Morison has also withdrawn because of a calf problem.

The date of 23-year-old Allen's operation has yet to be confirmed, but having initially been named in the squad, he cannot now face Scotland at Hampden Park on 22 March or Croatia in Swansea on 26 March.

Allen is likely to be out for up to three months when he finally goes under the knife.

Matthews suffered the problem in the Scottish club's Champions League exit at the hands of Juventus.

Tottenham winger Gareth Bale is included in the squad, with Wales hoping to see a continuation of his stunning recent form which has delivered 11 goals in his last 11 games.

Wales will look to build on an encouraging in February by completing a World Cup double over Scotland on Friday.

That initial victory over the Scots in October was the only win in four World Cup qualifying games so far for Wales, who sit second-bottom of Group A.

It also marked the climax of a tortuous period for new Wales boss Chris Coleman, who had struggled to maintain the improvements made under late boss Gary Speed.

James Collins returns to provide an option at centre-half after missing the 2-1 win over the Austrians.

But Darcy Blake has been deemed short of match fitness and is omitted from the game against Scotland, which marks Gordon Strachan's first competitive game in charge of the Scots.

Uncapped midfielder Jonathan Williams is promoted from the Wales Under-21 squad after scoring in their 3-0 win over Iceland and impressing with his performances for Crystal Palace.

Arsenal midfielder Aaron Ramsey is also back after being a late withdrawal for the game against Austria.

Wayne Hennessey is a long-term absentee as the Wolves number one continues his rehabilitation from a serious knee injury, so Boaz Myhill, Lewis Price and Owain Fôn Williams are the three goalkeepers selected.