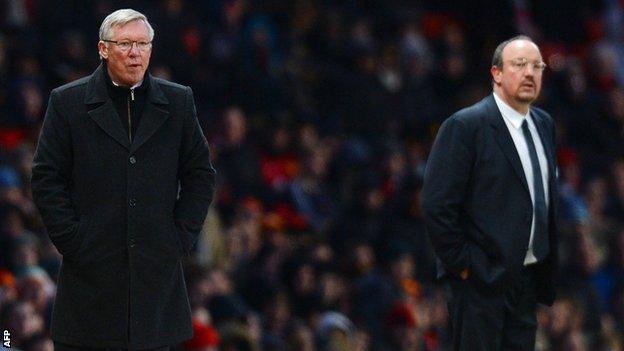 The pair have had an and the tension surfaced again at Old Trafford.

Benitez said: "I was waiting for him at the beginning, so you should ask him. I have education. I was ready.

"I know a lot of people were watching and I knew what to do."

"Benitez has been on a starvation diet when it comes to getting credit from Chelsea's supporters since he arrived in succession to sacked Roberto Di Matteo. They must find it in their hearts to afford him some here"

He added: "It's up to him. I was in the way waiting. If you are brave enough, ask him."

A growing animosity between Ferguson and Benitez, formerly on friendly terms, came to a head in January 2009 when the then Liverpool manager famously claimed the Scot received preferential treatment from the football authorities.

"Everyone can see that I'm talking about facts," the Liverpool manager told journalists. "I'm just saying things that everybody can see."

Most recently, Ferguson described the former Valencia and Inter Milan boss as a "lucky manager" after he landed the post at Stamford Bridge.

The pair again failed to shake hands at the final whistle on Sunday after Chelsea staged a stirring comeback from 2-0 down, goals from substitute Eden Hazard and Ramires in the second half setting up a replay at Stamford Bridge for the right to face Manchester City in the semi-final.

Early strikes from Javier Hernandez and the recalled Wayne Rooney had put United in command.

Benitez explained: "I was with my players, celebrating."

The ties will take place at Wembley on the weekend of 13 and 14 April.

It is not the first controversy surrounding Ferguson and a handshake. In February 2012, when Luis Suarez refused to shake Patrice Evra's hand before a match, Ferguson said: "I couldn't believe Suarez refused Evra's handshake. You saw the referee [Phil Dowd]. He didn't know what to do. It was a terrible start to the game and it created a terrible atmosphere.

"Suarez is a disgrace to Liverpool Football Club. He should not be allowed to play for Liverpool again. He could have caused a riot."

At Old Trafford, Chelsea ended the game in the ascendancy and Benitez said: "We have analysed the game and we deserved to win.

"We had some good counter-attacks even when we were two goals down in the first half and in the second half we were on top of them with some good football, great team spirit and working hard with passion and commitment."

Benitez changed the course of the game just after the break when he replaced Frank Lampard and Victor Moses with Hazard and Jon Mikel Obi.

He said: "I am a professional. We had been to Romania in the Europa League on Thursday and I knew we had players who would be tired and we had to manage the squad.

"We started with fresh legs but knew we would have to make substitutions and Hazard is a player with quality who can change [a game]."