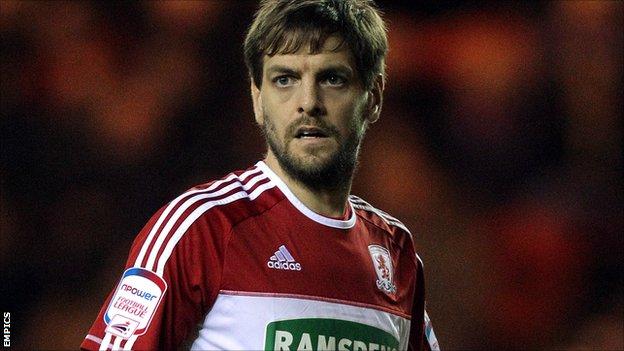 Defender Jonathan Woodgate is convinced Middlesbrough can achieve promotion to the Premier League despite slumping to ninth in the Championship.

Boro's fortunes have fallen since the turn of the year with nine defeats in 12 league games, including Saturday's 2-0 defeat by bottom side Bristol City.

"I still believe we can do it, until it's mathematically impossible," Woodgate told BBC Tees.

"There's no point playing football if we don't believe in it."

Such a tail off in form for Tony Mowbray's Teessiders comes in contrast to a bright end to 2012, where five wins in seven pushed the club to third in the division.

Ninth is Boro's lowest league position since a slip to 11th in October and Woodgate is critical of the squad's mentality once in a promising position.

"It will go to the wire, but the most disappointing thing was it was in our hands when we were around the top at one point and flying, but I think maybe a bit of complacency came in," he continued.

"Perhaps people thought we could swan around on a football pitch and not do the dirty stuff you have to do to get wins in this league."