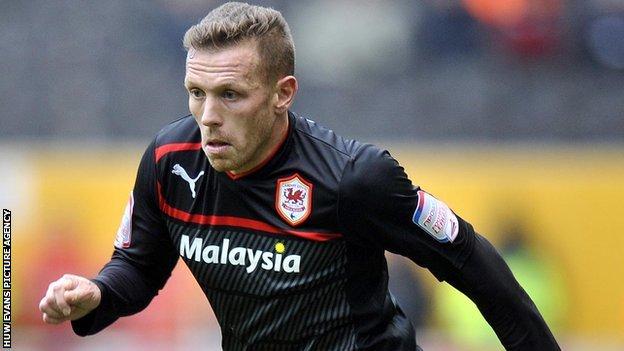 "Both should come back into the squad for [Tuesday] night," said Mackay.

Bellamy returns from a knee problem while Hudson has had ankle trouble.

The Foxes have won only once in their last seven encounters, while the Bluebirds have taken two wins in seven.

Mackay's men remain five points clear at the top of the table, with his former club Watford now their closest rivals, although they do have two games in hand on the Hornets.

Leicester have had a couple of sticky results, like us all, but they've got match-winners in their team

But he admits the strength in depth of Cardiff's squad will be tested as their challenge for promotion to the Premier League unfolds.

The manager added: "It's a fairly full squad so we'll have a look at it and see where we need to keep tweaking it because we have a lot of games coming up in a short space of time, especially the back end of March and start of April."

Bellamy scored the winner as the Bluebirds won at Leicester in December, but Mackay remains wary of Nigel Pearson's side.

"They've got an experienced manager who's a good guy and someone that - a couple of weeks ago you saw it - at home to Blackburn, they destroyed Blackburn.

"They've had a couple of sticky results, like us all, but they've got match-winners in their team and, like it was up there, it will be a really tough game for us.

"We dug in and really had to do that to win that game and I don't see it being any different [this time]."