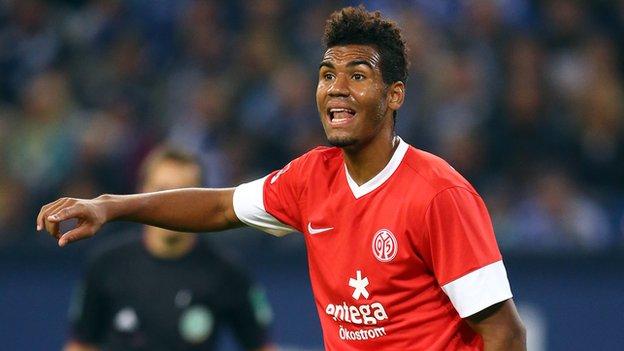 Cameroon have recalled fit-again striker Eric Maxim Choupo-Moting to their squad for this month's 2014 World Cup qualifier against Togo.

Choupo-Moting has only just returned from action following six months out with a knee injury and will be making his first appearance for the Indomitable Lions since 10 June 2012.

Also making their comebacks are Sebastian Bassong and Stephane Mbia.

But doubts remain over whether Samuel Eto'o will honour his selection.

The four-time African Player of the year failed to show up for the friendly against Tanzania and has recently voiced his concerns over his personal safety.

And coach Jean-Paul Akono stayed silent when asked if Eto'o would definitely turn up for the game in Yaounde on 23 March.

It means that in attack, Malaga's Fabric Olinga is likely to play alongside Choupo-Moting.

Elsewhere, Norwich City defender Bassong is back for the first time since the 2010 World Cup after showing good form with his English Premier League side. Mbia also plays in England's top-flight, but has fared less well with the bottom club QPR.

Guy Rolland Ndy Assembe has been warming the reserve bench for his club, Nancy, and Mathew Mbuta Andongcho has played only one match for his club, Army Football Club of Thailand.

But Akono, who is without a contract, said: "I can assure you that only the competitive players were called up."

Cameroon are currently third in Group I, level on points with Libya and one point behind the Democratic Republic of Congo. Togo are bottom with a lone point.

Akono knows a lot is riding on the match against The Sparrow Hawks - not only Cameroon's chances of making to Brazil next year but also his own future and that of his management staff.

"My staff and I are determined to lead the team to victory. We are still without a work contract, but we are confident," he said.

"I will have a contract if the officials so wish and if not, I will assume the consequences."