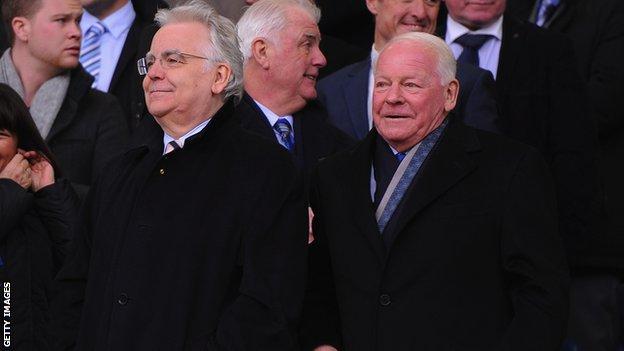 Wigan chairman Dave Whelan is hoping that Blackburn win their FA Cup replay with Millwall to set up a semi-final against the Latics.

The 76-year-old spent four years at Rovers as a player and broke his leg in the 1960 FA Cup final which they lost 3-0 to Wolves.

"It's fantastic to get back to Wembley, it's part of my dream," he told BBC Radio Manchester.

"The second half of my dream is to get Blackburn in the semi and beat them."

Wigan are the 78th different side to reach the FA Cup semi-finals.

Before Saturday's 3-0 win at Everton the Latics had never progressed past the sixth round of the FA Cup, but three goals in less than four first-half minutes saw them reach the last four.

Whelan bought Wigan in 1995 when they were in the fourth tier and has funded their rise through the leagues, including building a new stadium.

He also had a spell in charge of rugby league side Wigan Warriors, a role he relinquished in 2007, and is optimistic the two club's could complete an FA Cup and Challenge Cup double,

"Wouldn't it be wonderful if we could get both cups back in Wigan, that would be some fantastic record," he added.

"This [Everton] crowd is a very great sporting crowd. They applauded Wigan Athletic off that pitch and you very rarely see that wherever you go.

"I'd say to all the Everton supporters thank you for your great sporting way."