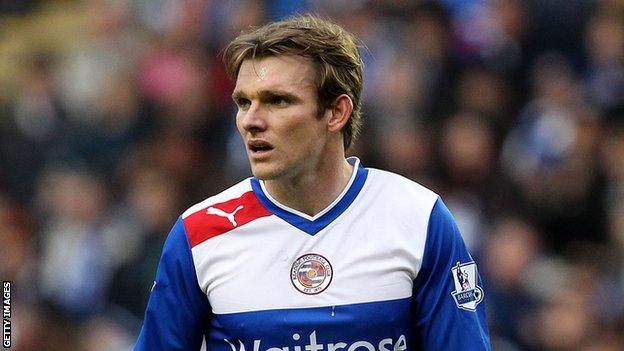 Reading midfielder Jay Tabb has said he will use his loan spell at Ipswich Town to try and earn a permanent move to Portman Road.

The 29-year-old, who is out of contract in the summer, played his first game of on Saturday.

"I spoke to a couple of clubs," he told BBC Radio Suffolk.

"It's almost like a trial basis for me here. I've got to prove I'm worthy of a contract in the summer."

Tabb had been a regular member of Brian McDermott's Reading squad in the first half of the Premier League season, but has since been told

"I've spoken to the gaffer a few times. He's a good person to ask advice from," he said.

"I could have joined Blackburn last weekend on loan. But I wanted a view to a permanent deal with them and I don't think they were too keen.

"Ipswich is a massive a club. And with me being out of contract in the summer, Ipswich was a club I wanted to speak to and see if they were interested.

"When Mick asked if I was willing to come on loan for a month I jumped at the chance.

"He's got a great track record in the Championship and the sooner we secure safety, we can build on it next year and I think the club's got a great chance."

Despite only having made one senior appearance this year, Tabb lasted the full 90 minutes as Town earned

The former Brentford man has said the prospect of staying close to his London roots is appealing.

"I'm a London boy and the train is not far. As a footballer it's your job and you've got to be prepared to travel the country," he said.

"I've spoken to some of the lads down here and they say it's a great club. Alex McCarthy [Reading goalkeeper] was on loan here and he loved it. Jimmy Bullard said he had a great time."