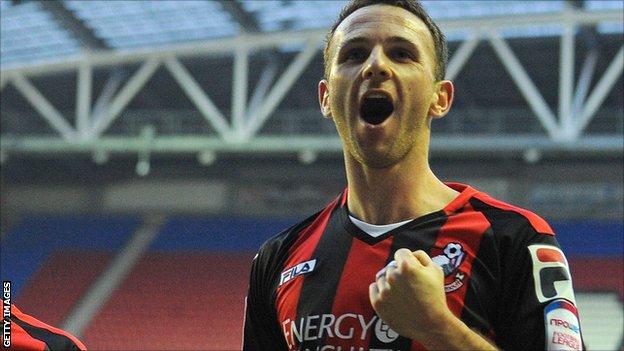 Bournemouth winger Marc Pugh believes the club will have to win seven of their last nine games if they are to win automatic promotion.

The Cherries have lost their last five games to slip from top to seventh, and are three points off the play-offs and seven off Sheffield United in second.

But Pugh believes the League One club can still go up automatically.

"Teams above us are going to drop points and we need to go on a really good run," he told BBC Radio Solent.

"I believe we can [catch the top two] - everyone can beat everyone in this league. I think we need to win seven of our last nine to go up automatically."

The Cherries travel to Stevenage on Tuesday and Pugh says there is no time for the squad to feel sorry themselves.

"We've got a cracking squad, but we are on a bit of bad run at the moment in our last five games," he said.

"We've got to keep our spirits up. We would have taken this position 24, 25 games ago because we were really struggling. It's frustrating, but we will go to Stevenage and take the positives from Saturday.

"The key is to be ruthless in both boxes and I'm sure if we do we will be fine.

"It's so important heads don't drop. Confidence is so important in football - we played well on Saturday but we just couldn't win the game. When you're luck's in, it's in. The past few games we have played well but not picked up the points but we can't get too down about things.

"We just need to get that win on the board and I'm sure if we do then we can go on another good run."

Having played several of the sides above them, Bournemouth now have a run against teams in the bottom half of the table and Pugh says they must take advantage of that.

"We've played most of the top teams now, we've just got Tranmere on the final day which could be a massive fixture," he added.

"We've got a lot of good home games that we fancy our chances in."