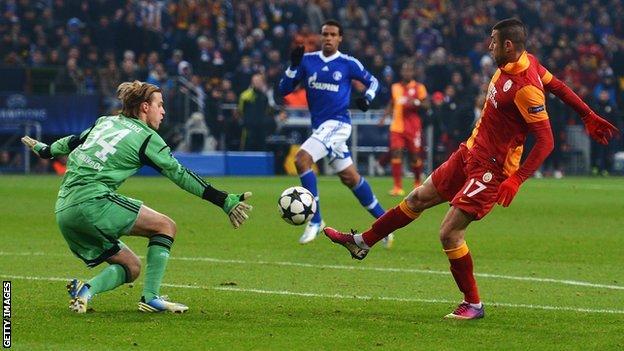 Galatasaray reached the quarter-finals of the Champions League with a thrilling 3-2 victory in Germany.

After a 1-1 draw in the first leg, Roman Neustadter prodded Schalke into an early lead from a corner.

But Galatasaray hit back with two goals in five minutes - a 25-yard strike from ex-Schalke midfielder Hamit Altintop and a cool finish from Burak Yilmaz.

Michel Bastos levelled in the second half to give Schalke hope before Umut Bulut's late winner on the break.

The result means Galatasaray have reached the last eight for the first time in 12 years and are the first Turkish side to do so in five years.

And the Ivorian started in menacing form with two quick-fire shots - the second beaten away by Schalke goalkeeper Timo Hildebrand.

But it was the home side who took a 17-minute lead against the run of play when Galatasaray failed to clear a corner and Neustadter reacted first to steer the ball into the net.

The visitors were level 20 minutes later when Selcuk Inan rolled a short free-kick to Altintop and he hit a fierce dipping drive from 25 yards that crashed in off the inside of the post.

And Fatih Terim's side were ahead when Albert Riera pinched the ball in his own half and quickly released Yilmaz.

The powerful striker shrugged off the challenge of Benedikt Howedes before cleverly lifting the ball over Hildebrand for his eighth Champions League goal in eight games.

The goal silenced the normally buoyant Gelsenkirchen crowd but, despite needing two goals to progress, Jens Keller's side looked determined to give it their all in the second half.

Marco Hoger cracked the crossbar from the edge of the box moments before Bastos levelled in the 63rd minute.

Galatasaray failed to clear the ball from their box and Japanese international Atsuto Uchida kept his cool to square for the Brazilian to finish into an empty net.

Julian Draxler and Teemu Pukki had half chances to pinch a winner for Schalke but the Turkish defence held firm.

And they snatched a winner of their own on the night in injury time when substitute Bulut beat the offside trap before putting the ball past Hildebrand at the second attempt.

"Now we're among the best eight teams in Europe. All Turkey and Galatasaray fans should enjoy this success.

"I want to congratulate all my players - I will hug and kiss them all. Players sometimes known for their limited movement and tackling ability were transformed in this game and fought for the team on the pitch.

"We played like an excellent European team in the first half."

"I have no explanation for the first-half performance. We played like we were doing a couple of weeks ago, without the necessary aggression, and everyone put in maybe 10% less than what was needed.

"You must not forget that some of our players were sidelined today.

"The second half was really strong and there is no reason to be depressed now."