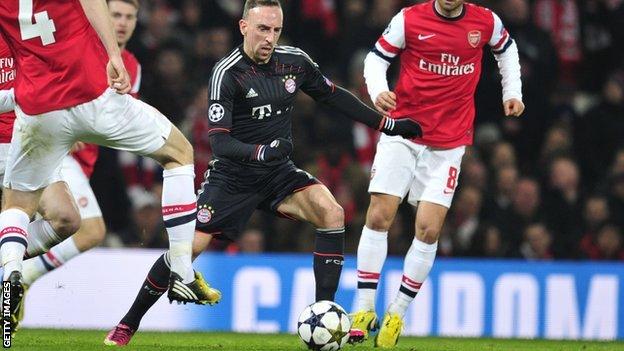 Bayern Munich winger Franck Ribery has been ruled out of the second leg of the last-16 Champions League tie against Arsenal on Wednesday.

The 29-year-old damaged ankle ligaments during his side's league win over Fortuna Dusseldorf on Saturday.

Bayern will also be without midfielder Bastian Schweinsteiger and defender Jerome Boateng, who are suspended.

But the German side are in a commanding position as they hold a 3-1 lead following their win at the Emirates.

Bayern's other winger and former Chelsea player Arjen Robben came on as a substitute for Ribery in the first leg victory but he is a doubt.

Robben, 29, has a calf problem and did not figure against Fortuna Dusseldorf.