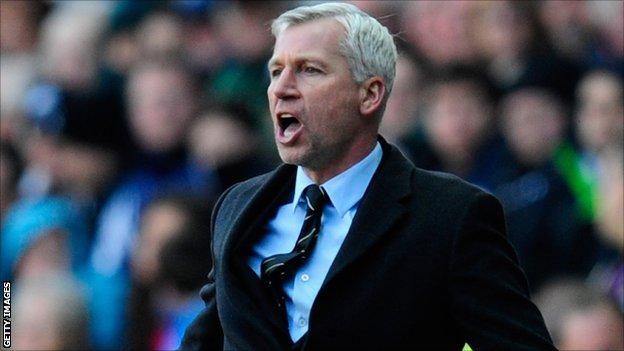 Nine points separate the Magpies from the drop zone and that cushion is timely going into Thursday's Europa League tie with Anzhi Makhachkala.

"What we've done is set ourselves up for what I'm hoping is going to be a special night for us."

Pardew added: "We've set the scene for that and I can't wait already. I hope we get as many people as we can afford to come to fill the place up."

In progressing through the play-offs, the group stages, the first knock-out round and the first leg of the last-16 tie in the Europa League, Pardew's side have now played 11 matches.

Added to existing domestic commitments in the Capital One Cup, the FA Cup and the Premier League, the squad needed to carefully managed, particularly with injuries to senior players Steven Taylor, Hatem Ben Arfa, Yohan Cabaye and Tim Krul throughout the season.

"We've approached it in an intelligent way," Pardew added.

"In a way that we have dealt with the team as it comes, put a team out that is good enough, and we've had to do that.

"We've had so many injuries that we had to put out the team that we had.

"There are too many games, but now we're at the nitty gritty - the real serious business, playing against real quality.

"I'll play my best team - that win [against Stoke] has helped me do that."