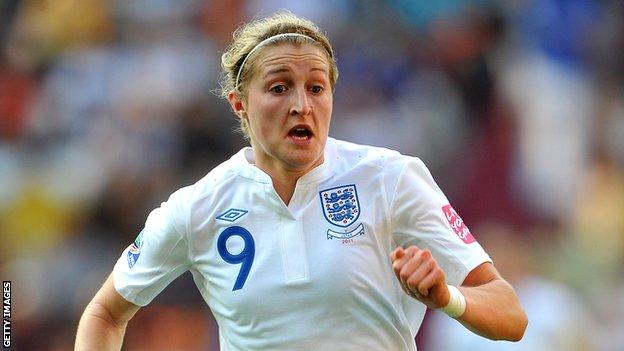 England will face Canada in the Cyprus Cup final after coming from behind to beat New Zealand 3-1 in their final Group A match.

Eni Aluko's goal was sandwiched between strikes from subs Ellen White and Toni Duggan to give England top spot.

Scotland were third in the same group with a 2-1 win against Italy, courtesy of Jane Ross and Rhonda Jones goals.

England went behind to an Amber Hearn goal after just seven minutes and coach Hope Powell said: "We weren't at our best in the first half.

"But we sorted out one or two things at half-time. I brought the substitutes on to win the game and it worked, that was pleasing but so was our performance.

"I thought that everybody played their part and we were deserving winners."

Wednesday's meeting with Canada will be a repeat of the 2009 final, which England won 3-1.

But last year the Canadians beat Team GB, composed almost entirely of England players, in the quarter-finals of the Olympic Games.

"Canada started a lot quicker than we did in that game at the Olympics," recalled Powell, "so we'll have to be prepared for that.

"But it will still be a difficult game against a very good, physical team. It's nice to be in the final again though, and I'm really looking forward to it."

It was a slow start that cost England against the Football Ferns, poor defending leading to striker Hearn opening the scoring from 20 yards.

Powell's team found no real cohesion in the first half, but they then produced a fine second-half display that was rewarded with three late goals.

Striker White drove in an excellent 18-yard drive to equalise in the 71st minute, registering her third goal of the tournament.

And in the last minute Duggan wrapped up victory when she robbed goalkeeper Erin Nayler to roll the ball into the empty net.

"It was a very pleasing performance and result, especially as Italy played their strongest team.

While England were triumphing in Nicosia, Scotland were producing a tremendous result against Italy in Larnaca.

Ross gave the Scots a 12th-minute lead, drilling in a 15-yard shot after collecting a pass from strike-partner Kim Little.

And a Little free-kick led to right back Jones doubling the lead 18 minutes into the second half.

Scotland coach Anna Signeul said: "It was a very pleasing performance and result, especially as Italy played their strongest team.

"They obviously wanted to win the game, but we made a fantastic start and dominated the first 25 minutes.

"We got stretched towards the end of the first half, but then we got another good goal and deservedly went on to win."

Sara Gama pulled a 73rd minute goal back for the Italians, but Scotland held on to beat a team 12 places higher than them at 11th in the world rankings.

In Paralimni, Northern Ireland ended their group campaign in defeat, though they had chances before Robyn Moodaly gave South Africa a 65th minute lead.

Jermaine Seoposenwe doubled the lead three minutes later, and Lynda Shepherd's 85th minute goal proved no more than consolation for the Irish, who failed to claim a single point during their campaign.

Manager Alfie Wylie said: "It was disappointing not to win the game - we had enough of the play and enough chances.

"We went behind against the run of play, but that goal and the second one we conceded were poor goals from our point of view.

"We got one back and then had a chance to equalise, but we didn't take it and ended the game with tired legs and a very disappointed team.

"I was pleased with the way we took the game to South Africa though, and it was another step in the learning curve for the players."