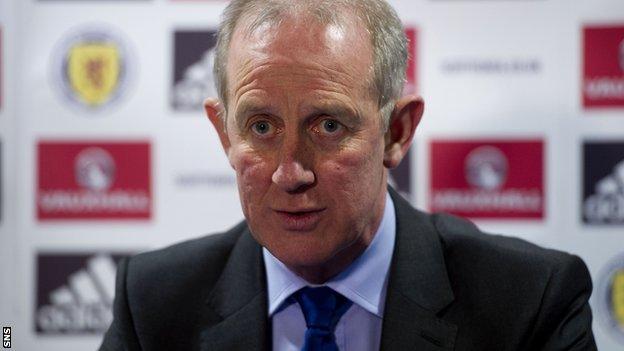 Coach Billy Stark has underlined the importance of Scotland opening their 2015 Uefa Under-21 Championship qualifying campaign with a home win.

The Scots play Luxembourg at St Mirren Park on 25 March, their first match in Group Three, which also includes Netherlands, Slovakia and Georgia.

"The nature of the competition is that there is little margin for error," said Stark after naming his squad.

"You want to get off to a good start, particularly when it is a home game."

Scotland just missed out on a play-off spot in the previous European qualification campaign, the finals for which are being played in Israel in June.

In their eight matches they secured home and away wins over Luxembourg, earned a win and a draw against the Netherlands, and suffered their sole defeat to Austria.

But even that was not enough to clinch top spot in the group, so Stark wants maximum points from the beginning as his team tries to reach the finals in the Czech Republic.

"We started with a 0-0 against Bulgaria the last time and you always thought you were chasing it after that," he said.

"It is an opportunity to get a good start. Luxembourg are not regarded as giants of the group, that is for sure. But we know from past experience that they can be a tough nut to crack - it took a good hour in the last game to do that.

"They pretty much have the same squad and they will have that extra experience.

"But if we want to be regarded as genuine contenders then these are the games that we must win and I am very optimistic."

Stark's squad features only two players who have yet to win a cap at this level - Celtic goalkeeper Robbie Thomson, 20, and Bournemouth forward Ryan Fraser, who has just turned 19.

Stark said of the former Pittodrie favourite: "Ryan started the season very well with Aberdeen and has been involved in the last half-dozen games at his new club Bournemouth.

"He is in the penetrating winger mould and his club manager has been really happy with him.

"He gives us that dynamic, positive play that we want to see and, although he might be slightly younger than the majority of the squad, he has shown that he is mature enough physically to handle first-team football."

Scotland squad for match against Luxembourg at St Mirren Park: