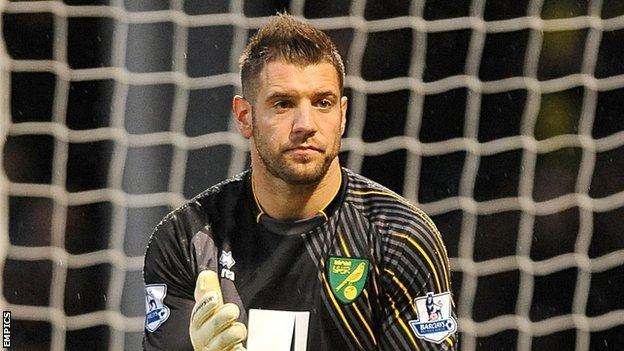 Norwich City keeper Mark Bunn has said he must maintain his form if he wants retain his place ahead of John Ruddy.

England international Ruddy has been sidelined since November but is

"I didn't expect to come into the team straight away but unfortunately for John he's been out with a long injury," Bunn told BBC Radio Norfolk.

Bunn arrived at Carrow Road from Blackburn in August with the prospect of playing the role of back-up to Ruddy, who started all of Norwich's first 13 Premier League games of the campaign.

But the former Everton keeper's recovery from a thigh muscle tear has been prolonged, handing 28-year-old Bunn the opportunity to make his mark on the first team.

He has since been Chris Hughton's first choice between the sticks, featuring in 16 consecutive league games and keeping four clean sheets in his last eight appearances.

"I love playing. It's been a while since I've played quite a few games," he said.

"From a goalkeeper's point of view it's always good to keep clean sheets. That's why I'm there, to make saves.

"Hopefully I can keep another clean sheet in the next game [against Sunderland]."

Bunn pulled off a number of crucial saves to help keep Southampton at bay in and received praise from his manager Hughton.

"He's done ever so well. He's got that little bit of composure about him at times," said the Canaries boss.

"Because he's not one of those really tall goalkeepers he has got that agility.

"He had to show good quality in his kicking and I think overall he's done well for us."