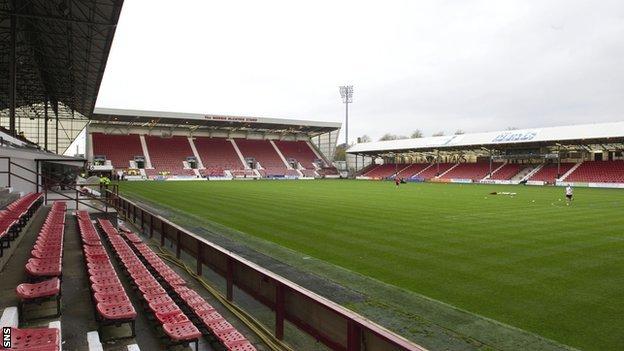 About 600 Dunfermline fans who gathered at the town's Carnegie Hall heard that Sir Alex Ferguson has offered to send a Manchester United team to Fife to play in a fund-raising match for the club.

The Pars' finances are in a parlous state and the club learned on Friday that Her Majesty's Revenue and Customs is to serve it a winding-up order.

"He is a very busy man but he is a true fan," said Jim Leishman of Ferguson.

"We've to go and speak to him to see if he can come up with something."

We don't have time for sympathy. We are needing solutions now to take this forward

The offer from the Manchester United boss came about when Roy Barry, who played for the Pars at the same time as Ferguson, was at Old Trafford recently for a match and Ferguson suggested staging a friendly game at East End Park to help his former club.

Leishman, charged with heading the steering group to bring fans, local business and the existing board of the First Division club together, also thanked Fife rivals Raith Rovers and Cowdenbeath for their willingness to help.

After addressing fans at the packed meeting on Monday night, he told BBC Scotland: "The gesture from Raith Rovers for Saturday is that, for every supporter over 2,000 in the Dunfermline away end, they will donate that money to Dunfermline Athletic Football Club."

A statement on the Stark's Park club's website said: "Dunfermline Athletic are, and hopefully always will be, our fiercest sporting rivals…. but they are also our friends, and we would like to offer our friends a helping hand in their hour of need."

Leishman told the crowd that progress was being made on a takeover between interested investors and majority shareholder Gavin Masterton.

Worryingly, the fans also heard that to cancel the debt to Inland Revenue would cost £134,000.

"There were a lot of good questions from the supporters," added Leishman.

"The steering group answered right from the hip. We tried to answer them as truthfully as we could. Time is not on our side but we are making progress.

"It's hurting everybody. The steering group is not taking one side or another. It's hurting Gavin Masterton as well.

"He is a Dunfermline Athletic supporter. His negotiators are round the table so that is progress.

"We don't have time for sympathy. We are needing solutions now to take this forward."