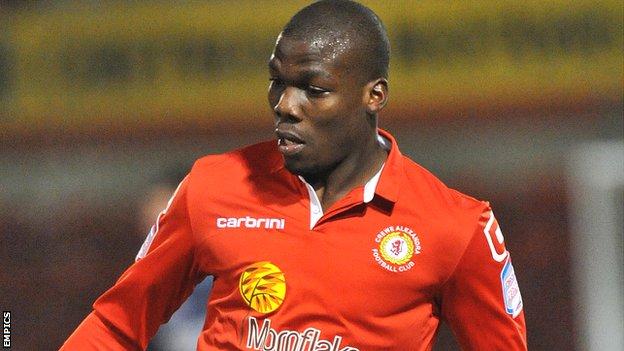 The Alex levelled just before the break when Pogba powered home a far-post header from Gregor Robertson's cross.

Pogba then pounced to win it before the Dons, who twice hit the woodwork after the break, had Anthony Kay sent off.

Kay was dismissed for two challenges, on Pogba and substitute Matt Tootle, in the space of four minutes.

The visitors had the better first-half chances, being denied an obvious penalty when Lowe's goalbound lob struck Mark Ellis's arm. And they were left cursing efforts by Chris Lines against the left upright and Shaun Williams' curling free-kick which hit the bar.

Crewe's victory, won by Pogba's twice-taken shot six minutes from time, lifts them back to within nine points of the League One play-offs, level with the Dons, with nine matches still to play for the Johnstone's Paint Trophy finalists.

"They've hit the post and bar, so we've had to dig in and grit it out, but we've had chances as well, so it was a good win in the end.

"We showed determination to come back. But, if you have great belief in a team you've always got a chance and I never write this team off.

"Who knows what they can do? On their day they can beat anybody and they have shown that as long as they reach a certain level.

"I was really frustrated with Mathias Pogba in the first half because he kept losing the ball, but he is a constant threat. You always fancy him to get a goal. We put him up there to cause problems in the final 10 minutes and thankfully he's got us the winning goal."

"The sending off is an embarrassment to Anthony Kay. I have stuck up for him in the past, but they were two blatant yellow cards.

"He knows how difficult it is at the moment. He knows how short I am of numbers. He's let me down.

"For an hour there was only one team in it but, for the last half-hour, we were appalling."