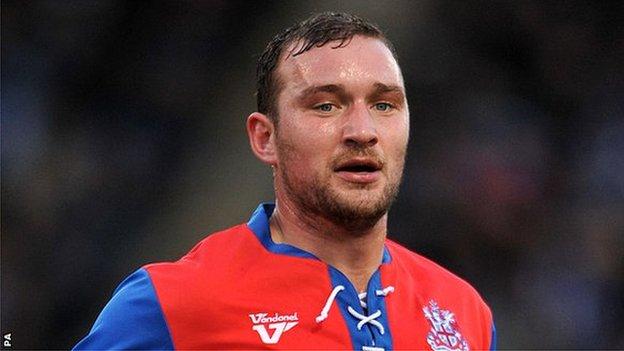 Gillingham extended their lead at the top of League Two to five points after coming from behind to draw at Rochdale.

George Donnelly put the Dale ahead when he pounced on a mistake from defender Leon Legge and chipped over a stranded Stuart Nelson in the away goal.

But the visitors had to hold on after Andy Frampton was dismissed for a late off-the-ball incident.

Frampton was sent off after he reacted angrily to a challenge by Donnelly on Charlie Lee and clashed with Bobby Grant.

Donnelly almost helped his side capitalise on their man advantage, but his strike went just wide.

Prior to the sending off, Gillingham forward Antonio German had a good chance to win it when he went one-on-one with Josh Lillis, but the Brentford loanee's strike was brilliantly saved by the Rochdale keeper.

But the result means Gillingham, who lost both Chris Whelpdale and Bradley Dack with injuries during the match, are unbeaten in their last 10 away matches.

Meanwhile, Rochdale are six points clear of the relegation places in 17th position.

"We controlled the first half but didn't control the second and we could quite easily have gone under.

"To come away with a point against a good side - I'm relatively pleased.

"I probably have more conversations with George [Donnelly] than I do with my wife. He can be frustrating but he can also be a match-winner, and today he was very nearly a match-winner."

"We played very, very well second half. We had a few good opportunities second half but the team we were playing against played with freedom, which you can do when you're in the middle of the table. I thought we were unlucky not to win it.

"I've spoken to Andrew [Frampton about the sending off] - you can't get a more honest bloke than Andrew. He said he never touched him, but I haven't seen it so I can't comment on that. Andrew says he didn't do anything.

"Here we are with another draw, away from home, in the north of England. What a fantastic achievement, and effort from the players."