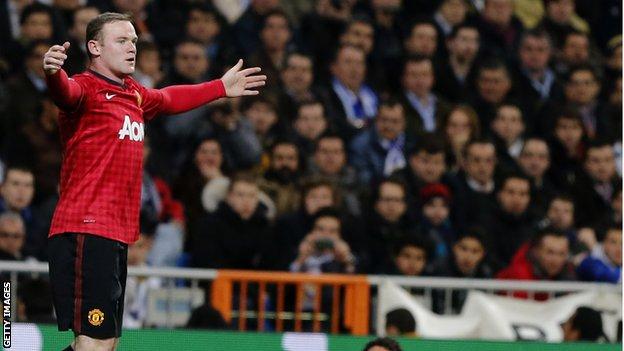 Wayne Rooney will remain at Manchester United for the rest of his career, believes director Sir Bobby Charlton.

Manager Sir Alex Ferguson's decision to leave the striker out of the team defeated by Real Madrid last week triggered speculation he could be sold.

Ferguson has since rejected talk of the 27-year-old leaving, and now Charlton has reaffirmed that view.

"There is no way he will ever be allowed to move on, because that is not the way Sir Alex works," said Charlton.

"Wayne has been our regular goalscorer - and he scores fantastic goals. Not only that, he has an influence on the rest of the team."

His overall tally since moving to Old Trafford in 2004 stands at 167 goals in 344 games, while he has scored 33 times in 79 England internationals.

Rooney's status as Manchester United's most iconic player is no longer clear-cut with Robin van Persie making a major impact since joining from Arsenal for £24m in the summer of 2012.

The Dutchman has scored 19 Premier League goals and claimed 12 assists this season, compared with 12 and nine for Rooney.

But rather than seeing Rooney's role diminishing, Charlton expects him to rise the challenge of matching the impact of Van Persie.

"Just because he has some competition, I don't think that is a problem," Charlton added.

"I don't worry about Wayne Rooney."

But Charlton ruled out a return to the club for Cristiano Ronaldo, who played for United between 2003 and 2009.

There had been speculation that the Portuguese winger could return to Old Trafford if he failed to agree a new contract at Real Madrid.

But Charlton insisted the idea of bringing back a player who left for a fee of £80m had not been discussed by United's powerbrokers.

"Signing Ronaldo has never even been mentioned in any of our board meetings," said Charlton.

Meanwhile, the United legend is backing manager Ferguson to bounce back from the Champions League defeat that left him 'distraught'.

And he is even predicting the Scot could bury the pain of their controversial exit by winning the trophy next season.

He added: "What happened against Real will have hurt him a lot but I don't see why we can't win the Champions League again under him.

"Even if it is much more difficult because the opposition is so much tougher."