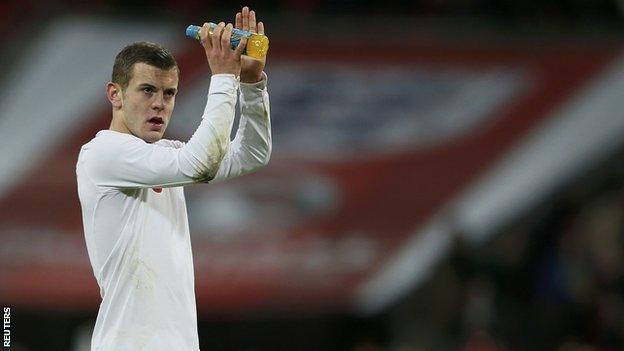 Arsenal midfielder Jack Wilshere has been ruled out for three weeks with an ankle injury and will miss England's World Cup qualifiers against San Marino and Montenegro this month.

The injury also rules the 21-year-old out of Arsenal's Champions League tie against Bayern Munich on Wednesday.

The Premier League side trail the Germans 3-1 from the first leg.

"He has an inflamed ankle, the other ankle to the one he injured [before]," Wenger said.

He has some bone bruising. The last time it deteriorated into a stress fracture. That's what we don't want to happen.

"He will be out for three weeks and will not be available against Munich and Swansea, and not for England."

Wilshere suffered the problem with his left ankle in Arsenal's 2-1 defeat by Tottenham on 3 March.

He had missed the whole of last season with an injury to his right ankle.

Despite having only seven caps to date, Wilshere is seen as a key component of manager Roy Hodgson's midfield as England try to win a place in the 2014 World Cup finals.

He was named man of the match when England beat Brazil in a friendly at Wembley on 6 February.

The youngster would have been a certain inclusion in the squad for England's two World Cup qualifiers this month.

They face San Marino on 22 March and then travel to Montenegro four days later for a game which could decide who tops Group H.

England are second in the group with eight points, two behind Montenegro. Both countries have played four of their 10 games. Poland are third with five points from three games.

This latest blow is a yet another set-back for Wilshere in a career that has been hampered by injury problems.

He made his debut for Arsenal as a 16-year-old at Blackburn Rovers in September 2008 before being loaned to Bolton in January 2010.

On his return to the Emirates in August, Wilshere broke into the Arsenal team and made 49 appearances in all competitions that season, before being named PFA Young Player of the Year in 2011.

But he spent all of last season on the sidelines and missed Euro 2012 having injured his right ankle in pre-season before suffering a stress fracture during his recovery.

Wilshere has played 26 games for Arsenal and made two appearances for England this season.

Wenger added: "He has some bone bruising. The last time it deteriorated into a stress fracture. That's what we don't want to happen.

"We trust people who are specialists in this area.