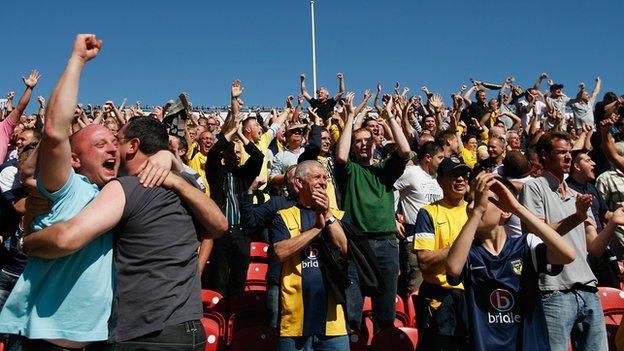 Ahead of Tuesday's home match against Barnet, Lenagan has used his programme notes to call for positivity at the Kassam Stadium.

Lenagan says he is "surprised at the consistent vocal negativity of a minority of Oxford United supporters".

He added: "They risk dragging down the spirit of the players, fans, managers, staff and owners alike."

We are all disappointed not currently to be "winners" but booing the team, continually calling for the sacking of the manager and persistently trying to find "things wrong at the club" is not the way to achieve togetherness

The U's chairman continued: "We are 10th in the league - not a club in danger of relegation - and still with an outside chance of the play-offs even after a highly disrupted 12 months of significant injuries.

"Our core squad is strong and contracted for next year with the opportunity and finance to improve it even further in summer."

Lenagan says that while he would like United to be consistent winners, booing the team or calling for the sacking of manager Chris Wilder is not the way to achieve success and he urges supporters to get together behind the team through what he describes as a "crucial period".

"Of course we are all disappointed not currently to be 'winners'," he said. "But booing the team, continually calling for the sacking of the manager and persistently trying to find 'things wrong at the club' is not the way to achieve togetherness, consistency and medium-term success.

"Far more positive and well-worthy of praise is the continuous, excellent vocal support for the team and the manager of the truly committed travelling army of away Oxford United fans.

"Whether winning at Wimbledon, Exeter, Bradford, Gillingham, Torquay or losing at York, Burton or Rotherham, the travelling fans' support for the team is exceptional and always positive.

"It is no surprise to see the team play so well away from home where they are certain of positive support.

"Conversely, one of the best, clear messages of support to the team and manager was the loud continuous chanting for 'Oxford United' throughout the difficult second-half against Rotherham last week when the game was lost. I am sure that that demonstration of support carried forward in the players' minds into Saturday at Torquay.

"I would like to ask that the whole of Oxford United's fans and supporters be seen to get together behind the team and the manager through the crucial next 9 games, win or lose, without the booing, rude shouts at the manager or other non-supportive behaviour from what is a small minority."