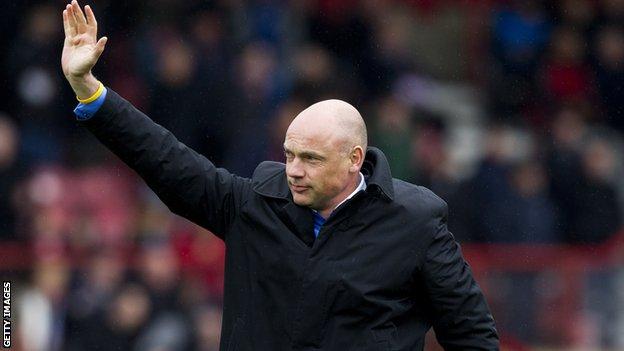 Brentford boss Uwe Rosler believes lower league teams have to take part in too many cup competitions each season.

League One and Two sides play in the FA Cup, the League Cup and the Football League Trophy, as well as completing a 46-match league campaign.

And Rosler believes the demands of the extra matches are proving detrimental to English football as a whole.

I feel in the lower leagues when you don't have such big squads or big budgets for sports science like the big clubs, then it's tough

"The lower leagues are there to develop players. That doesn't only come through games but also training.

"In our league we have no time to train, it's just resting then playing. Other countries are miles ahead in terms of player development."

This season, Rosler's Brentford enjoyed a fine run in the FA Cup, taking Premier League side Chelsea to a fourth round replay before a 4-0 defeat at Stamford Bridge ended their involvement.

The German has previously stated that the FA Cup run has damaged their League One promotion push and, in all, they have had to play an extra 10 matches this season.

Despite all the tradition surrounding the cup competitions, Rosler believes lower league teams are at a disadvantage compared with clubs in the top two divisions because of the strains extra games place on them.

"Every foreign football fan looks at the Premier League and English football because a big part is the tradition and history," he said.

"But you have to move with the times, and I feel in the lower leagues when you don't have such big squads or big budgets for sports science like the big clubs, then it's tough," he added.