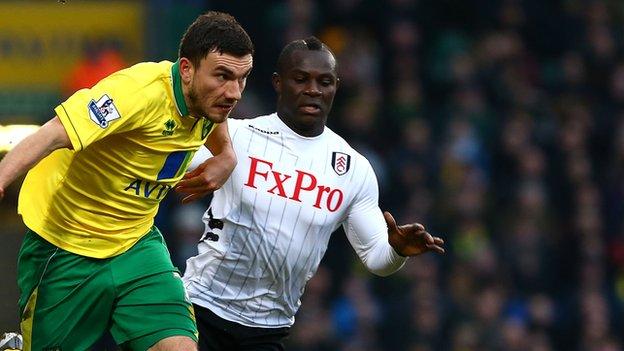 Ghana have handed a debut call-up to midfielder Emmanuel Frimpong for the 2014 World Cup qualifier against Sudan.

The 21-year-old, who is on loan at Fulham from Arsenal, was recently given the go-ahead by Fifa to switch international allegiance from England.

He is one of four players called up for the first time by Black Stars coach Kwesi Appiah for the 24 March game at the Baba Yara Stadium in Kumasi.

The others are Baba Rahman, David Accam and Mahatma Otoo.

Former Fulham defender John Paintsil has been left out after his recent off-field problems.

Frimpong has played only twice for Fulham since his January move from Arsenal but will be given the opportunity to compete for a spot in central midfield for the Black Stars.

He was born in Ghana before relocating to England when he was eight. He later represented England at junior level before deciding to opt for Ghana.

Frimpong becomes the latest player to have taken advantage of a Fifa rule change that allows players below a certain age to switch to the country of their parents if they have not played a full international for another country.

AC Milan midfielder Sulley Muntari makes a return after being dropped from the 2013 Nations Cup squad.

Ghana are in desperate need of three points as they look to close the gap on group D leaders Zambia, who have a three point advantage.