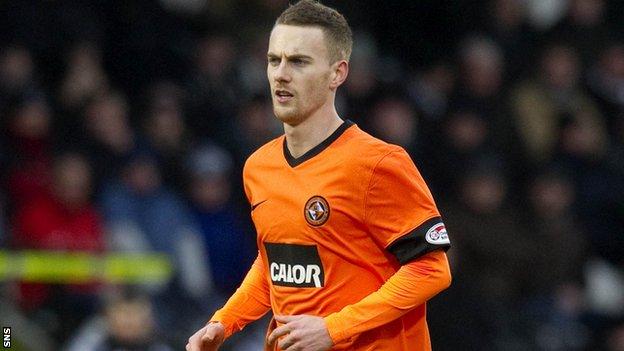 Rory Boulding believes he can go on to do great things at Tannadice as soon as he gets a first Dundee United goal under his belt.

The striker joined the club on a short-term deal as cover for the injured Johnny Russell after being released by Kilmarnock in January.

On Sunday his side face rivals Dundee in the Scottish Premier League.

"If you get a goal you get a bit of momentum and that's a great thing to get," said Boulding.

"That's what happened last season. At Livingston I got given the chance when John Collins and Yogi [John Hughes] came in.

"I scored two in my first game and just didn't look back - after six games I had 10 goals and that was that.

"I'm definitely keen to show what I can do at this level."

His rich vein of form in West Lothian during 2011/12 led to interest in him from clubs in Scotland's top tier.

Kilmarnock pounced and signed Boulding on a three-year deal - a length of contract rarely handed out to Scottish players these days.

But things did not pan out quite how he expected.

"I only started one game and played a few minutes in three other games," Boulding said.

"So I definitely didn't get a chance. There was no explanation really and I didn't ask for one.

"It just got to the point where I was getting no opportunity at all and it was clear I wasn't going to be given it, so I asked to leave and they agreed."

The limited finances in the game these days increasingly sees young footballers left on the so-called 'scrapheap'.

Therefore, Boulding's decision not to remain at Rugby Park and pick up guaranteed wages for another two-and-a-half years seems a brave one - especially with no other teams showing immediate interest in the Englishman.

"I think I'm good enough to play at this level and that's why I did it," the 24-year-old explained.

"If I didn't think that I would've sat it out for three years and just got paid, but that's not what I want to do."

Without a club, Boulding decided to return to his native Nottinghamshire in order to maintain fitness and morale.

"When someone signs you on such a long contract and you don't get the opportunity, your confidence does take a knock," he said.

"But going back home and spending time with my family definitely helped and I feel like I'm back now.

"It was enjoyable to actually get a bit of time to get my thoughts together after going in day to day and knowing you're not going to get played - it's quite disheartening.

"I was still training hard but getting my thoughts together and getting positive for another crack at it."

And that chance came when Tangerines boss Jackie McNamara sought an immediate replacement for 20-goal striker Russell, who broke his leg in a game with Inverness CT.

United's other main forward, Jon Daly, is also struggling with a groin injury.

Boulding, on a deal until the end of the season, made his debut in the goalless draw against St Mirren on Saturday.

And he will make his first home appearance in the Dundee derby on Sunday, where the Tannadice crowd can run the rule over whether he is the man to help spearhead their attack for the remainder of the campaign.

"I've shown the gaffer that I'm up to speed and my fitness is good," he adds.

"It's a fantastic opportunity and I've just got to do my best to take it."