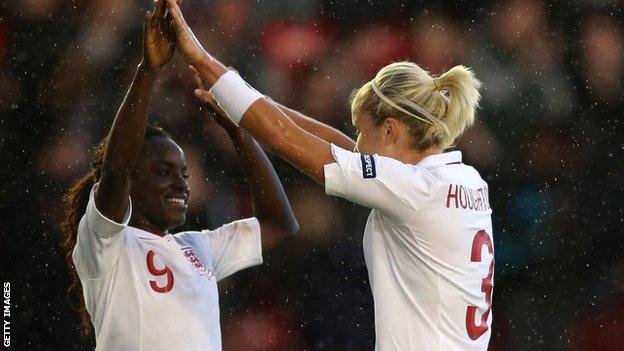 England coach Hope Powell says victory in the Cyprus Cup final would be an important stepping-stone to success in July's European Championships.

England face Canada on Wednesday in a repeat of the 2009 final that they went on to win.

"Our main priority in Cyprus has been to step up our progress towards the Euros," said Powell.

"If we can now win the trophy it will be another big lift for the girls going into the summer."

England face Canada after topping Group A with seven points from three matches, while the Canadians have a 100% record from Group B.

Canada have significantly improved since Briton John Herdman took over as manager in 2011, winning bronze at last year's Olympic Games.

To reach the last four at London 2012 they knocked out Team GB, whose line-up was almost exclusively English, in the quarter-final.

Canada take on Powell's side looking to win the Cyprus Cup for a record fourth time in the six years of the tournament's history.

"We know the challenge that Canada present and this will be a really good opportunity to test ourselves," Powell added.

"They are very good side - they're physical, they're strong, fit and fast and they use all of that to their advantage.

"We've got to be prepared for that and do what we are good at, which is moving the ball around quickly."

The game to decide third place in the tournament will feature New Zealand and Switzerland, who finished second in Group A and Group B respectively.

Scotland, the third-placed team in Group A, will meet the Netherlands - third in Group B - for fifth place.

Scotland coach Anna Signeul said: "After beating Italy in our last group game this is another good challenge against a team higher than us in the world rankings.

"For us to go on improving as a team we need to be playing against teams like this."

Northern Ireland, Group C's bottom team, will end up with the 12-nation tournament's wooden spoon unless they beat South Africa.

Alfie Wylie's team have already lost to the South Africans in the group stages and the manager said: "It's going to be difficult with no fresh legs.

"We've got 10 players who've had to play in all three group games, which is not a situation I'd have chosen but we've had injuries and a lack of senior players.

"The youngsters have stepped up to the plate though, and we'll give it all we've got to try and end the tournament with a win."