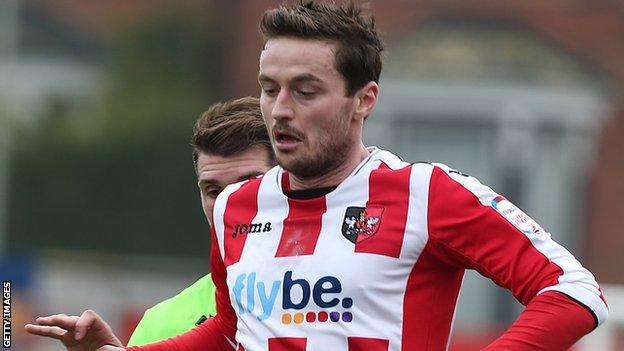 The influential 35-year-old midfielder fell awkwardly after a challenge 10 minutes into the second half.

"It sounds to me as though it's quite severe," manager Paul Tisdale told BBC South West Sport.

City are already without fellow midfielders Alan Gow, Tommy Doherty and Liam Sercombe due to injury.

We haven't got a large squad, we're now being stretched to the limit

Gow is unlikely to be fit in time for the end of the season, but may make the play-offs if City get there, while Sercombe will not return this campaign after breaking his ankle.

"He [Oakley] was again the one making the game move for us and the one thinking the quickest," Tisdale added. "Losing him really stopped us in our tracks."

Oakley initially but his time was cut short after suffering a thigh injury that kept him out for the rest of the season.

Tisdale having and Oakley has played 37 games this season.

Exeter have already and the Exeter boss is unsure if the club will be able to afford to bring anyone else in on loan.

"'I'll ask the question," Tisdale said when asked if he would approach the club's board for funds to bring in some midfield cover.

"I can't see us being able to bring anybody in, but we'll see what we can do.

"We haven't got a large squad, we're now being stretched to the limit.

"I might have to guess a little bit with young players and fringe players, who may be asked to do jobs they haven't done so far for us."