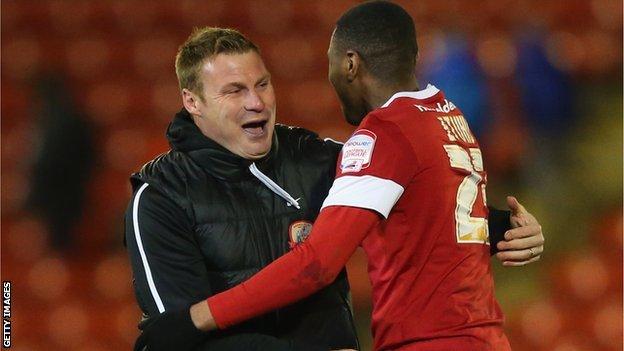 Barnsley boss David Flitcroft has praised his side's ruthlessness after their 2-1 win over Brighton.

The Tykes bounced back from their 5-0 FA Cup defeat by Manchester City to record a win that moved them out of the Championship's relegation zone.

"I'm proud because we showed the kind of ruthlessness that we witnessed (from City) on Saturday.

"Every single player was incredible and the fight that I saw today was special, they're a special group," he said.

"I can't tell you how delighted I am, it was a really brave performance."

Flitcroft's side are now two points clear of the bottom three with a game in hand on all their nearest rivals and the 39-year-old has now led the Tykes to nine wins from his 15 games in charge since succeeding Keith Hill.

However, six of their remaining 10 fixtures are against the league's current top six and Flitcroft acknowledged his side will need to maintain their current level of performance.

"Without a shadow of a doubt we need to keep going but some teams will underestimate us," he told BBC Radio Sheffield.

"What has got us to this point is the fight and the scrap that I've talked about.

"I've said from day one that I believe we will stay in this league."