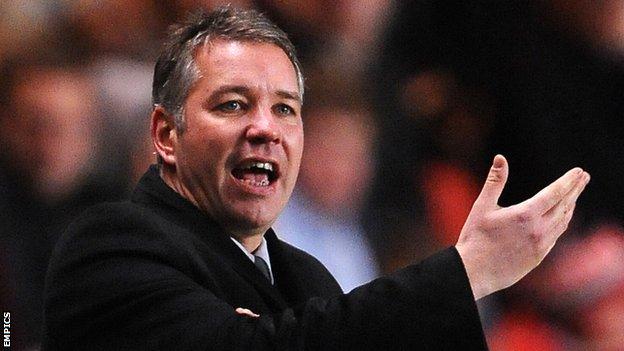 Peterborough boss Darren Ferguson has said he will meet referees' chief David Allison to discuss a number of "harsh" decisions against his side.

Ferguson believed Leeds should have had a player sent off in

"I have good communication with David," he told BBC Radio Cambridgeshire.

"I've got a meeting with him on Friday and I'm going to show him a lot of clips from throughout the season where I felt we've had some harsh decisions."

Posh could have pulled themselves out the Championship relegation zone with victory at Elland Road, but were pinned back by Sam Byram's second-half equaliser.

But Ferguson felt the home side should have been reduced to 10 men when Stephen Warnock brought down Kane Ferdinand, with the midfielder bearing down on goal.

Referee Simon Hooper opted to show Warnock a yellow, rather than red card, for the foul.

"If it happened at the other end the referee would not have got out of here alive if he hadn't have given a red card," said Ferguson.

"But he's a human being and he's got to make a decision in the split second."

On Friday Ferguson, son of Manchester United boss Sir Alex, will meet with former official Allison, who is in charge of referees for the Football League.

"I also think it's important we have these meetings at the start of the season where managers meet the referees and it's about respect."