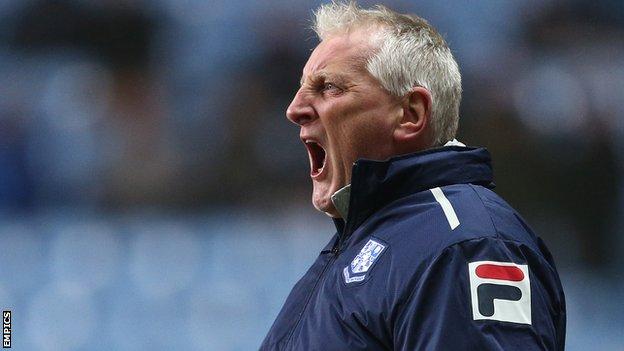 Tranmere manager Ronnie Moore has apologised to fans for the team's performance in the 2-0 loss at Walsall.

After spending most of the season top of League One, the Prenton Park club are now fifth in the table after losing six of their last nine games.

"They've been working all day and have come and spent good money and the least they expect is (the players) to go and put a shift in for them," he said.

"I apologise for that. It's my team, I pick it and it's totally unacceptable."

Moore, now in his third spell as manager at the club, has previously voiced concerns that injuries and the return of loan signings to parent clubs had begun affecting their form.

And the 59-year-old former Rovers striker, who signed a new contract at the club until 2015 in January, does not want the squad the waste their early season work when they looked odds-on for promotion.

"It's not good enough, powder puff and mentally weak. Everything that could go wrong went wrong," he told BBC Radio Merseyside.

"There were no guts, determination or sharpness and we've been second best from start to finish.

"Once that [the penalty] went in you've seen one or two of our heads go down, which I don't like.

"It's a good job we're not in a relegation battle as we'd go down playing like that."