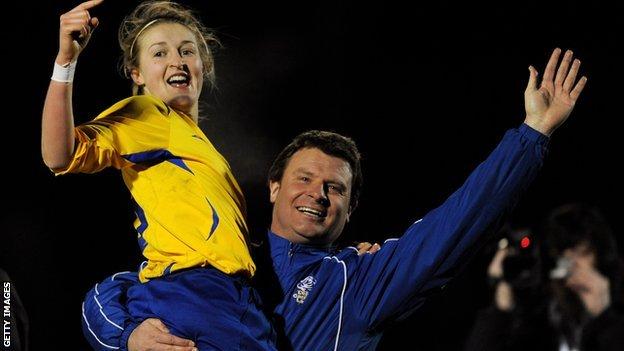 New Lincoln Ladies manager Rick Passmoor says he would like to add to his squad, but will not be rushing into the transfer market.

Passmoor was only appointed in February and the new season begins on Sunday with a home FA Cup tie against Chelsea,

England goalkeeper Karen Bardsley is the only new recruit to date.

"The majority of targets had already signed for other clubs, but I am quite happy with the squad," former Leeds United boss Passmoor told BBC Sport.

"We will be giving the same players the opportunity to show what they can do."

"We want players that will add value, not just as players but as people who have all-round ability to represent the club."

We have a small, close-knit squad and we are trying to use that to our advantage

Passmoor has been encouraged by his first six weeks in charge, but has found it challenging working with a small squad, which has been further depleted by England call-ups for captain Casey Stoney, Sophie Bradley, Jess Clarke and Bardsley.

All four were part of the squad that won the Cyprus Cup, but are available for Sunday's fifth-round tie against Chelsea at Lincoln's new home ground Sincil Bank.

Passmoor, who has taken over a team that finished fifth in last season's Super League, said: "The squad has been quite thin on ground, but I have been happy with how things have gone pre-season.

"Preparation has been hindered by the cold weather, but we have had a training camp and that went really well. It was a good bonding exercise as well as good for training.

He added: "I have a reputation as being hard but fair on players, but I want a culture where they enjoy it and have fun - but first foremost we are here to work hard.

"It's a long-term project here, but I want to set off on the right foot and winning games will obviously help. A good cup run would be great and it would be a morale-boosting win on Sunday."