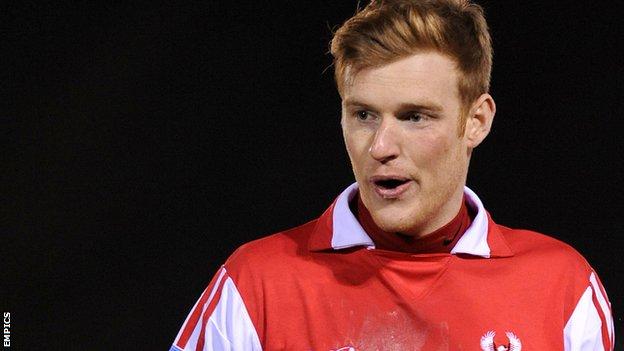 Both players have penned deals tying them to the Blue Square Bet Premier promotion chasers until 2015.

Lewis, 30, signed from Redditch by manager Steve Burr in May 2010, was due to be out of contract this summer.

Midfielder Storer, 25, who arrived from Nuneaton Town in the summer of 2011, was also due to be out of contract at the end of this season.

"It was never in question for me and I don't think it was for the gaffer either," Storer told BBC Hereford & Worcester.

I am over the moon to sign for another two years

"We complement each other well, the club and myself. I love playing my football here and love the surroundings and the people here. I'm just really enjoying myself.

"I am over the moon to sign for another two years."

Harriers boss Burr added: "Kyle has grown with every game he has played for us."

"He's very proud of what he does and appreciative of the lifestyle he has got.

"He knows what it is like to be working full-time and doing jobs that are nowhere near as glamorous as playing football for a living.

"As for Danny, he is one of the best keepers in the division.

"For us to be able to get him tied up for two more seasons is great."

Harriers dropped to third in the Blue Square Bet Premier table on Tuesday night, as the result of Mansfield Town's win over Grimsby Town.

But, having been bottom on 29 September, Burr's men remain on course for the play-offs thanks to their stunning run of just four defeats in 27 league games over the past six and a half months.