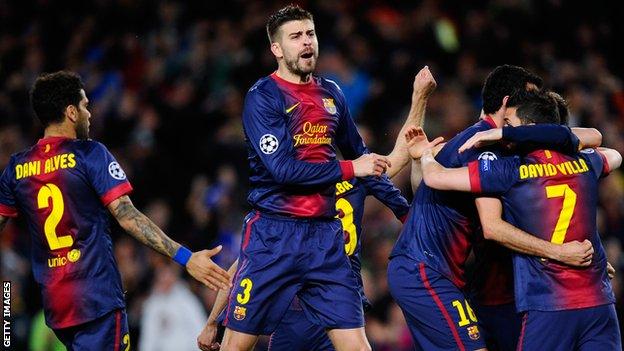 The draw for the quarter-finals of the Champions League took place in Nyon on Friday.

For the first time since 1996 there will be no representatives from the Premier League in the last eight.

Nonetheless, with teams from five different nations still left in the competition this is perhaps the sort of cosmopolitan Champions League that Michel Platini dreamed of when he came to the Uefa presidency in 2007.

The remaining teams comprise a rich variety of styles and experience, and have made for some mouth-watering ties. Paris Saint-Germain face Barcelona, Malaga meet Borussia Dortmund, Real Madrid play Galatasaray and Bayern Munich were drawn against Juventus.

How they got here: It hasn't been the canter to the quarter-finals that many expected. Barca won the group despite a shock loss at Celtic, and another defeat in Milan in the last 16 looked as if it would be fatal. The 4-0 win over the Italians at the Camp Nou was thrilling, but offered evidence of the excellence and the flaws of Tito Vilanova's side in equal measure.

Domestic form: A record-breaking start saw Barca win 18 and draw one of their first 19 games. Even though successive defeats to Real Madrid (in the Copa del Rey semi-final and La Liga) were damaging, they remain 13 points clear of the champions at the table's summit.

Formation: Usually it's 4-3-3, though that sometimes becomes 3-4-3, as it did against Milan in the second leg. While Pep Guardiola's team used possession as a containment tactic as well as an attacking one, Vilanova's model are a little more aggressive - and therefore perhaps a touch more vulnerable to the counter.

One to watch: Jordi Alba. He came through La Masia as a winger, but was converted to a left-back under Unai Emery at Valencia, and returned as Spain's established choice in that position in 2012. As adroit in defence as attack, Alba has covered more ground than any other Barca player in this year's competition.

Champions League fact: When Barcelona beat Manchester United at Wembley in 2011, they became only the fourth club to win the trophy more than once in the same stadium after AC Milan, Real Madrid and Liverpool.

How they got here: It's been hard. After emerging from a tough group featuring Dortmund, Manchester City and Ajax, they squeezed past Manchester United in the first knockout round. The opening game with City has been their European season in microcosm - sporadically brilliant, but living dangerously.

Domestic form: A slow start to the campaign quickly put a block on any aspirations of retaining their hard-won La Liga title, especially in light of Barcelona's stellar form. Jose Mourinho said in September he "didn't recognise" his team, but they have looked more themselves in the last two clasicos.

Formation: Mourinho's tried and tested 4-2-3-1 is their way, with the tendency to counter-attack. Yet there have been a few tweaks; Xabi Alonso remains deep in midfield but his partner Sami Khedira has more and more licence to make attacking inroads in central areas

One to watch: Raphael Varane. Having come through the excellent Lens academy, the 19-year-old centre-back joined in 2011. Jose Mourinho initially considered loaning him out, but after seeing him in training and practice matches changed his mind. Varane is powerful, fast and extremely cool under pressure.

Champions League fact: El Real won each of the first five editions of the trophy, but only two players played in all of the finals - Paco Gento and Alfredo Di Stefano, with the latter scoring in all five.

How they got here: Perhaps the least fancied of all the teams in the last 16, Malaga edged out Porto with an excellent second leg comeback against the experienced Porto. The Andalucians were - along with the Portuguese champions - the first team to qualify from the group, after just four games.

Domestic form: Malaga are currently in the same fourth spot that got them into the Champions League - and again, it's almost by default, with a 13-point gap to Atletico Madrid in third, with Manuel Pellegrini's side drawing too many of their games.

Formation: Pellegrini is famously a fan of 4-4-2 and that's how Malaga usually line up. Coveted playmaker Isco cuts in from the left and Joaquin stretches the play on the right, with Jeremy Toulalan and Manuel Iturra holding the fort in the middle.

One to watch: Lucas Piazon. The teenage forward joined the club on loan from Chelsea in January and has made a swift impact. The Brazilian has good vision, passes well and works incredibly hard all over the pitch.

Champions League fact: In qualifying for the first time this season, Malaga became the third club from Andalucia to compete in the Champions League. Winger Joaquin has played in the competition for one of the others, Real Betis, as well as Valencia.

How they got here: In rather less style than they hoped, with a 2-0 home defeat in the second leg against Arsenal seeing them through on away goals. Bayern edged their group from a competitive Valencia side, after recovering from a shock defeat to BATE Borisov in their second outing.

Domestic form: Imperious. Bayern are 20 points clear at the top of the table. They have scored 67 and conceded just 10 in their 25 Bundesliga games to date.

Formation: 4-2-3-1 is Bayern's default. The question is not how but who, such is the plethora of options available to coach Jupp Heynckes. The form of Mario Mandzukic and Thomas Mueller has been such that players of the stature of Mario Gomez and Arjen Robben must wait for their chance.

One to watch: Javi Martinez. Despite impressing at centre-back for Athletic Bilbao last season, the Spanish international has returned to his original midfield role for Bayern. The Bundesliga's record signing has the strength to win the ball and the craft to begin attacks as well.

Champions League fact: Bayern are the only side to have ever won the trophy after a replay. They beat Atletico Madrid 4-0 in 1974 after Hans-Georg Schwarzenbeck's equaliser in the last minute of extra-time snatched a draw in the original final.

How they got here: Via the hardest route possible, frankly. Dortmund topped a group containing Premier League champions Manchester City, Real Madrid and Ajax, going unbeaten. They then removed dark horses Shakhtar Donetsk with a clinical display in the second leg in north-west Germany, winning 5-2 on aggregate.

Domestic form: Having won the Bundesliga in successive years, Dortmund have taken their eye off the ball at home. They are second but lie an enormous 20 points behind Bayern Munich.

Formation: It's a fashionable 4-2-3-1, with Jakub Blaszczykowski, Mario Goetze and Marco Reus lining up behind lone front man Robert Lewandowski. The burgeoning synergy between Goetze and Reus is the focal point of many of Dortmund's attacks, and Goetze has even slipped into the false nine role when Lewandowski has been absent.

One to watch: Ilkay Gundogan. This 22-year-old central midfielder has become vital to Dortmund during his second season at the club. Mobile and an excellent passer, he was bought to nominally replace Nuri Sahin in 2011, and now keeps the former Liverpool loanee on the bench.

Champions League fact: When Dortmund beat Juventus in the 1997 final, current Aston Villa manager Paul Lambert became the first British player to win the trophy with a non-British side.

How they got here: The last 16 win over Celtic looked easier on paper than it was in reality, especially in the first leg at Celtic Park, but it was a breeze after a tough group stage. Antonio Conte's team emerged top and unbeaten from a group containing reigning champions Chelsea and stylish Shakhtar Donetsk.

Domestic form: After going unbeaten in the whole of last season, they've already lost four in this one, but their combination of their stamina and their rivals' failings see them nine points clear.

Formation: Juve's strength is in their adaptability. They usually use a 3-5-2 shape, but occasionally line up in a 4-1-3-2. Versatile defender Giorgio Chiellini is usually the key to facilitating the switch, though the preferred three-man defence gives wing-backs Stephan Lichtsteiner and Kwadwo Asamoah the opportunity to join attacks.

One to watch: Paul Pogba. Many doubted the 19-year-old's wisdom in turning down a new contract at Old Trafford to head to Turin, but he has proved the naysayers wrong. The French midfielder is as stylish as he is strong, and has already scored a clutch of eye-catching goals for his new employers.

Champions League fact: Along with Bayern, Juventus hold the record for having lost the most European Cup/Champions League finals. They've been defeated in all but two of their seven appearances in the showpiece.

How they got here: The 3-2 aggregate win over Valencia in the last 16 was tighter than it should have been after an excellent first leg display in Spain. Carlo Ancelotti's team had already won five of their six group games to end with 15 points - the highest total of any team.

Formation: Ancelotti switched to 4-4-2 for the final Champions League group game with Porto, and have stuck with it since. The new shape now sees Lucas Moura provide pace on the right and Javier Pastore cut in and pick passes from the left.

Player to watch: Blaise Matuidi. This 25-year-old midfielder has improved exponentially under the tutelage of Carlo Ancelotti, and has added a technical finesse to his physical power. In PSG's new system, he has even broken forward to score some vital goals this season.

Champions League fact: Ezequiel Lavezzi has five goals in this season's competition, leaving him just two goals short of the club's all-time Champions League top scorer - George Weah, all seven of which the Liberian legend scored in PSG's run to the 1994-95 semi-finals.

How they got here: By the skin of their teeth. Galatasaray don't know the meaning of the phrase 'easy route'. After a scratchy start to a group containing Manchester United, they have progressed to the quarter-finals on the back of three successive away wins. The last-16 victory at an in-form Schalke was undoubtedly the most impressive of the trio.

Domestic form: Like Juve, Galatasaray have found managing European and domestic commitments tricky. A draw and a defeat in their last two Super Lig games have seen their lead cut to four points.

Formation: Coach Fatih Terim is committed to an attack-minded game, so the arrival of Didier Drogba has not led to joint-Champions League top scorer Burak Yilmaz dropping out. They play together in a 4-1-3-2, with Wesley Sneijder tucked in behind. Felipe Melo, who played a more box-to-box role last season, has returned to sitting deep.

One to watch: Selcuk Inan. This 28-year-old midfielder has transformed Galatasaray in the centre of the park since arriving on a free transfer in the summer of 2011. An accomplished passer of the ball, Inan scores and creates plentifully and is a master at set-pieces.

Champions League fact: The furthest that Cimbom have reached in the competition is the 1989 semi-final, where they were soundly beaten by a Gheorghe Hagi-inspired Steaua Bucharest. Hagi joined Gala seven years later and led them to a UEFA Cup final win over Arsenal in 2000.