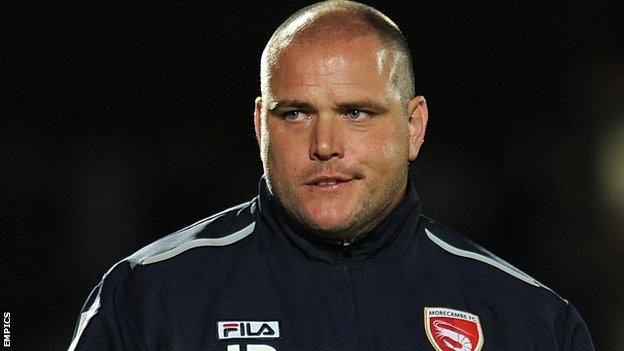 Morecambe boss Jim Bentley has revealed he is looking to decide the future of all the club's out of contract players before the end of the season.

Kevin Ellison and Jack Redshaw have signed new deals in recent weeks as the Shrimps look to have all but secured league safety with eight games to go.

"I don't want to get rid of half of them and then bring another whole new lot in," he told BBC Radio Lancashire.

"We've tied one or two down and we're in discussions with one or two."

He added: "They are a good set of lads, they've got a great togetherness, they work hard, know what me and Kenny are about and how we want to play.

"Until I know what I've got to play with it's difficult to do your negotiations."

The 36-year-old former defender set the club a target of 50 points for safety this season, which they reached following the draw with Northampton.

Bentley even believes the club have an outside chance of reaching the play-offs with eight games to go, but he first wants to begin planning his squad for next season.

"I'm not one of these managers that leaves it until the end of the season so you run the risk of losing players who are out of contract," he continued.

"We'll see what we've got, what players we can keep hold of and unfortunately players are going to have to leave - that's the way football is.

"Even since November we've been looking at targets to come in and the players we wanted to keep at the club."