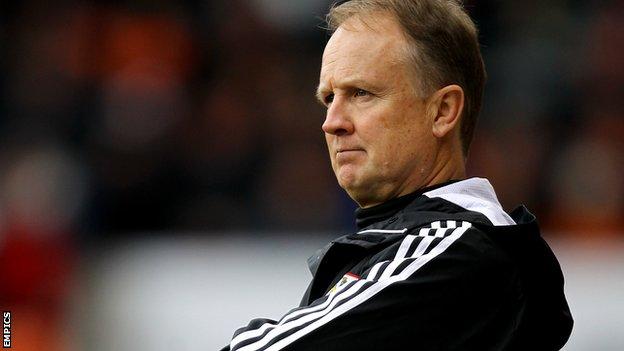 Bristol City head coach Sean O'Driscoll has insisted Saturday's game with relegation rivals Wolves is no more important than any other.

O'Driscoll's side are bottom of the Championship table, level on points with both Wolves and Peterborough.

"If you get six points it would be a six-pointer. You don't get six points, do you? It's a three-pointer," he told BBC Radio Bristol.

"We are trying to concentrate on what we've done well and continue with it."

When O'Driscoll first took over from Derek McInnes in January, City were eight points adrift of safety.

And although they remain bottom, they are in the best form out of the sides in the drop zone, having gone four games unbeaten.

"We've been in this position ever since I walked through the door so it's nothing new to us," he continued.

"We're not worried about where we are in the division. We need to focus on what happens in the 90 minutes.

"We can't let what's at stake affect the players."

Wolverhampton-born O'Driscoll grew up watching Saturday's opponents, but despite the affiliation he concluded: "At this time it's just somewhere we can get three points."