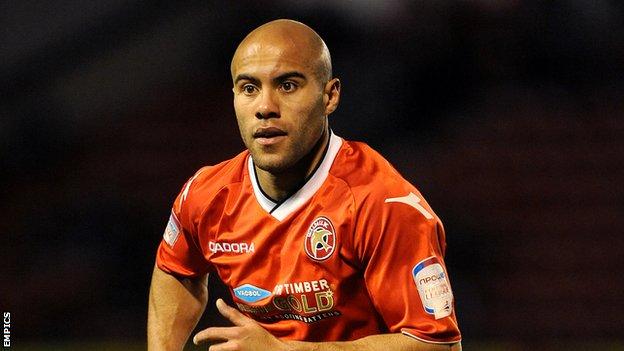 Adam Chambers says confidence at play-off chasing Walsall is high going into the final stages of the season.

Having previously gone on a 16-match streak without a win earlier in the season, the Saddlers have surged up the League One table, and now lie eighth.

"All season we've had ups and down, but we haven't really changed much," midfielder Chambers told BBC WM.

"We're confident in the squad we've got - it's a young squad but we've got confidence in everyone."

He added: "We're just confident at the moment and we'll hopefully keep this going until the end of the season."

The Saddlers were as low as 19th in the table during early December and faced the prospect of a relegation battle.

But they have only lost once in 2013, and this incredible upturn in form now means Dean Smith's side sit four points off the play-off places.

Chambers, however, believes his side need to keep their feet on the ground going into the final eight games of the season.

"You can't get too far ahead of yourself in this game," the 32-year-old said. "If you start looking too far ahead, then things start crashing down.

"We just take it one game at a time. I know it sounds boring saying that, but that's how we have to look at it."

Meanwhile, Walsall winger Kieron Morris, 18, has joined Blue Square Bet North side Worcester City on loan until the end of the season.