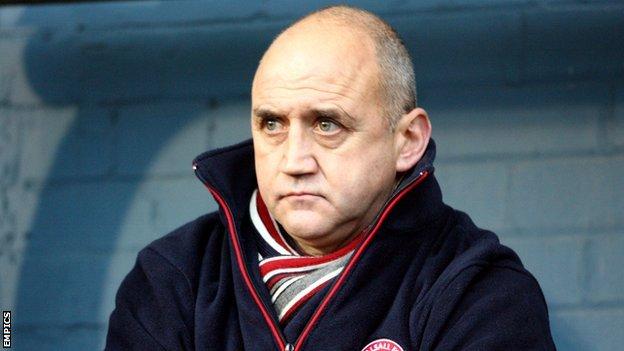 Cambridge United boss Richard Money has said the club cannot progress amid an atmosphere of "cynicism and mockery".

Money used his press conference on Thursday to question the attitude of some sections of the club's support and local media.

He told BBC Radio Cambridgeshire: "The biggest challenge from now until the beginning of next season is to turn all the cynicism and mockery into a positive atmosphere.

"Without it, life becomes difficult."

Cambridge, who were in the second tier of English football in 1993, are now in their eighth season outside the Football League.

They have lost two play-off finals in pursuit of promotion and are currently on their fourth manager in four years.

The U's have undergone but former Luton manager Money is confident he can build a competitive side with a small budget next season.

"The problem I have is people have heard it all before," he said. "It is reflected in the cynicism - and the mockery in some cases - that there is around the football club by people who think they know what's going on but have a lack of understanding.

"The biggest challenge is to turn that into a positive."

Cambridge are solidly placed in mid-table in the Blue Square Bet Premier after some encouraging performances in their last four games.

"We have a philosophy and a plan and we feel like we can work it properly," said Money. "But the first part of that is that everybody is on the same page.

"We can't let those dissenting voices, those people who are able to get to a significant group of people, we can't let them get negative.

"Because if we do, they can very quickly turn the majority negative in the same way."