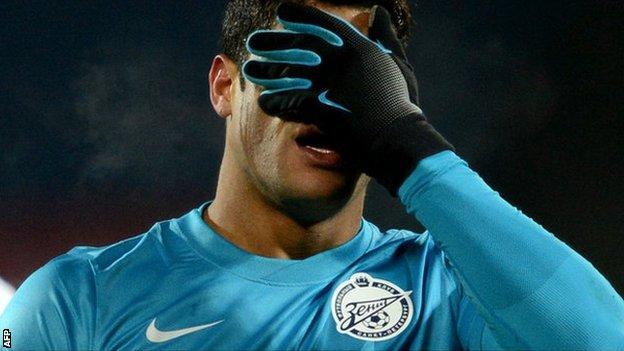 Russian side Zenit St Petersburg missed a late penalty as 10-man FC Basel knocked them out of the Europa League.

Quarter-final draw to be made on Friday.

Spurs beat Inter Milan 3-0 in the first leg at White Hart Lane last week but only scraped through on away goals, losing 4-1 in the San Siro after extra-time.

Chelsea lost 1-0 against Steaua Bucharest in the first leg but Fernando Torres's second goal in 20 games helped the Blues win 3-1 at Stamford Bridge to seal a 3-2 aggregate success.

There was drama at St James' Park as Papiss Cisse headed home in injury-time to give Newcastle a 1-0 aggregate win against Anzhi Makhachkala to make it three English teams in the last eight of the competition.

A hat-trick from Lazio's Libor Kozak helped the Italians to a 5-1 overall win against VfB Stuttgart, while Oscar Cardozo netted twice as Benfica won 3-2 at Bordeaux after a 1-0 first-leg victory.

Extra-time goals from Jose Rondon and Vladimir Dyadyun sealed a 2-0 triumph for Rubin Kazan over Levante after the first match had ended goalless.

Czech side Viktoria Plzen were playing their 16th game in the competition after battling through from the second qualifying round, but their run came to an end as Fenerbahce gained a 1-1 draw to advance 2-1 on aggregate.

England are the only country to have more than one team in Friday's quarter-final draw, with Italy, Portugal, Russia, Switzerland and Turkey having one apiece.