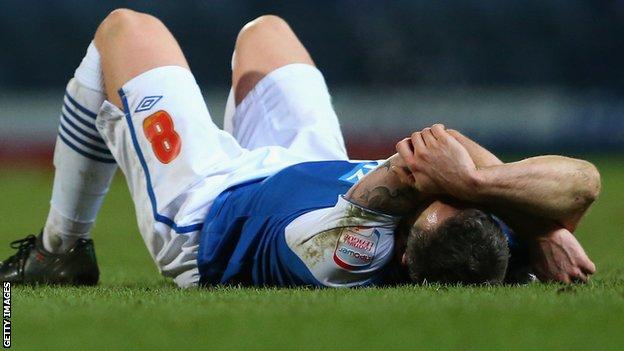 Blackburn midfielder David Dunn has revealed the pain he felt losing to Millwall in the FA Cup quarter final.

The 33-year-old was in the Rovers side that lost the replay 1-0 and believes it was his last shot at Wembley.

"Personally, realistically it was probably my last chance to play at Wembley and I could get choked up now thinking about it," he said.

"Before the game I promised my little boy I'd take him to Wembley, but unfortunately it wasn't to be."

Without saying too much, when one door closes another one opens so who knows what the future will bring

Dunn, in his second spell at Ewood Park after four years at Birmingham, has made just four starts this season after the club were relegated from the Premier League.

The midfielder, who won his only England cap in 2002, is out of contract at the end of the current campaign and is yet to decide his future.

Asked if the next few games would be his last in a Rovers shirt he told BBC Radio Lancashire: "I hope not. The only thing I can do is try my best and perform to the best of my ability.

"Without saying too much, when one door closes another one opens so who knows what the future will bring.

"I've had a fantastic time here and a lot of support from everyone in the town and I'm truly grateful.

"That might sound like a curtain call - it isn't, but you know how quickly things move in football."

This weekend Rovers renew one of the oldest rivalries in football when they welcome Burnley to Ewood Park, and it's a fixture the Clarets haven't won since 1979.

"The Burnley game is the biggest derby for our club out there and it's one where we've done very well in previous years," Dunn added.

"We're going to have to show a lot of fight, some composure and some confidence to try and play football."