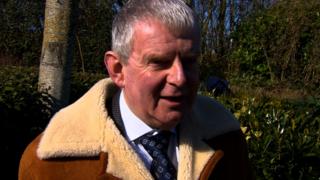 Motson on Gubba and the Berlin wall

Gubba, who was 69, joined BBC Sport in 1972 and Motson recalls him filming on the Berlin Wall at the 1974 World Cup, and chartering a plane to watch the Soviet Union play in Mexico before the World Cup in 1986.

Motson, who knew Gubba for more than 40 years, describes him as "a proper bloke and a really good friend".