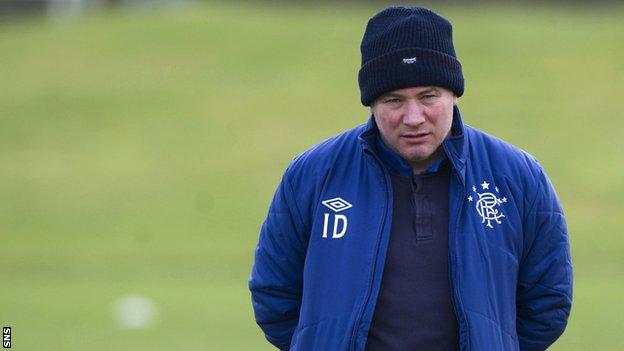 Rangers boss Ally McCoist has welcomed proposals for 'colt teams' from Celtic and Rangers to join a new four-division set-up.

Scottish Football League chief executive David Longmuir has suggested that the colts would operate separately from the 'parent' clubs.

And some SFL clubs have been critical of Longmuir's proposals.

"There is obviously healthy discussion required to take it forward but I would welcome the idea," said McCoist.

Scottish Premier League teams are due to vote on a three-division structure at a meeting on 15 April that will have 12 teams in each of the top two divisions and 18 teams in the third tier.

However, the latest proposal is for four divisions with 12 teams in each of the top two tiers and 10 sides in the bottom two.

McCoist added that he believes criticism of Longmuir's proposal was "very harsh".

"I don't think he's doing his job if he doesn't bring options and possibilities up," the Rangers boss added.

"So I would have to say the criticism of him would be wrong.

"All he is doing is bringing another option to the table which people need to discuss, which I think is a healthy thing."

Meanwhile, it looks like attacking midfielder Dean Shiels has played his last game for Rangers this season.

The Northern Ireland international was carried off in Rangers' defeat by Annan last weekend.

McCoist said: "Dean went down to London on Wednesday and it is not great news with regards his knee.

"Hopefully it does not require an operation. Without speaking to the specialist myself, which I haven't done, I have spoken to the doctor. It would be very surprising if Dean comes back this season.

"It looks at this stage as if no surgery will be required."