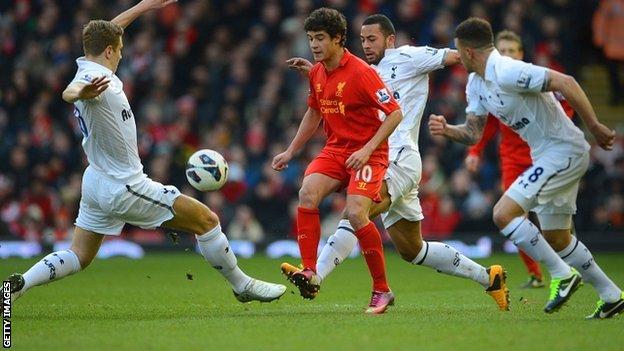 On Saturday, the Saints host a Liverpool side likely to include the 20-year-old, who has impressed since moving from Inter Milan in January.

Pochettino coached the Brazilian for a time at Espanyol in Spain last season.

"As with most Brazilians, Philippe has a special magic in his feet," the Saints boss said.

"Aside from the magic that he has, he also has an amazing work rate and that makes us doubt whether he fits the mould of a typical Brazilian player or a European one because his work ethic is outstanding.

"What is important about him is he is a good lad, a good kid - a great, humble person."

And the Argentine coach, who tried to bring the player to St Mary's in January, placed him - potentially at least - in the company of fellow countryman and Barcelona legend Messi and Brazilian veteran Ronaldinho.

"I do think Coutinho has that same quality that Ronaldinho and Messi have, but he has much to prove yet," said Pochettino.

"What is really clear to me is that Coutinho is a really responsible player - really dedicated and responsible to his own players."

Coutinho has quickly settled into life at Anfield since his £8.5m switch, with Liverpool winning all three of the Premier League games he has started.

He has struck up a good partnership with Uruguayan striker Luis Suarez, with the Brazilian calling his team-mate "phenomenal", but he admits the physicality of the Premier League has come as a surprise to him.

"It is very different here. In Brazil the game is very open, the defenders are not as tight with the attacker. I think this is the hardest thing here," Coutinho told the Liverpool website.

"Also the game is very quick - but I feel I can improve these things during training and improve my intensity. I have been doing some body building, too, so I can get more used to the physicality."

Coutinho worked under former Espanyol coach Pochettino during a loan spell last season, but the Saints boss was coy about his efforts to sign the midfielder in January.