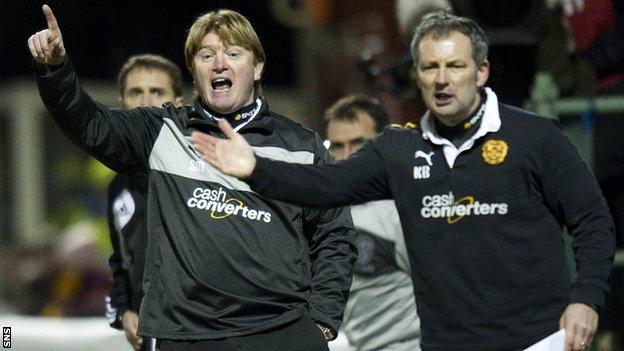 Stuart McCall is confident he will have signed a new contract with Motherwell before their Scottish Premier League game with Dundee on 30 March.

His side beat Hibs 4-1 at Fir Park on Friday to guarantee a top-six finish.

James McFadden scored and set up two others, while Kallum Higginbotham netted a spectacular scissor-kick.

Of his impending new contract, McCall told BBC Scotland: "It'll get tied up, I'm sure, before our next SPL game. I'm very confident."

Despite dominating the early stages of the game with some fluid football, 'Well went in at half-time trailing after Hibs' Tom Taiwo had scored an excellent diving header from David Wotherspoon's cross.

However, McFadden turned on the style in the second half, setting up Michael Higdon's 21st of the season before scoring a skilful and composed goal himself.

"If there are Motherwell fans out there who haven't come, he's finding his best form now and he's getting fitter," McCall said of McFadden.

"Some of his foot-work, we know what he's about and he showed that tonight. The team were excellent but he added the entertainment value, he was terrific.

"The performance as a whole merited the victory.

"The park's in a decent condition compared to a few that we've been to of late and we got the ball down and moved. All four goals were top quality."

And with top six now confirmed, McCall is now keen to fulfil his next mission, which is to ensure Fir Park hosts European football again in 2013/14.

"The next aim is trying to finish in a European spot, which is the top three," he said.

"The lads have got the bit between their teeth and we've got to maintain second place."

The North Lanarkshire side's boss admitted, however, that it will be hard ensuring all of his current side remain in that corner of Britain for the next campaign.

"We'll probably not be able to keep them all but we'll try to keep as many as we can," admitted McCall.

"I know the lads enjoy it here but there comes a stage when you have to move on for your own career.

"We've got to enjoy what's here just now and I'm delighted with some of the young boys who have come through.

"But we're still on the look-out for good players and if we lose one we'll try to bring in somebody as good as we possibly can."