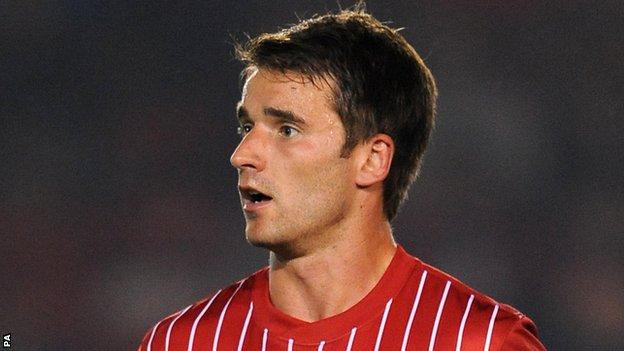 Telford set a new Conference record of 27 league games without a win after losing to relegation rivals Lincoln.

Todd Jordan's superb 25-yard strike put the Imps ahead, only to be cancelled out by Steve Jones' header.

Steve Leslie's 12-yard shot put the visitors into the lead as they looked to finally have their long-awaited win.

But Jamie Taylor restored parity with his first goal in 10 games, after being teed up by Andrew Boyce, before striking an 88th-minute winner.

Taylor's brace enabled the Imps to capitalise on the postponement of Nuneaton's game with Woking and move out of the relegation zone on goal difference.

However, the result piled yet more misery on the Bucks, whose last success in the league was a 4-1 win at Dartford on 9 October.

By surpassing the winless run of 26 games by AP Leamington in the 1981-82 season, Telford have now become the outright holders of an unwanted record.

And, if results elsewhere do not go their way this week, they are now just one defeat away from relegation if they lose at home to Nuneaton next Saturday.

"We created quite a few opportunities. Their keeper was the man of the match and we had four cleared off the line. We've created a lot more, but we've left ourselves open a couple of times as well which they could have exploited.

"Spirit-wise we were terrific and kept going. We'll need that to the end of the season because there'll be more twists and turns like today when nearly everyone won today, so it's a good job we got the points.

"The result is all. It's about now. From now to the end of the season, we can be absolutely rubbish as far as I'm concerned as long as we get the results."

"The mood in the camp is disappointment. We are working hard and getting more attacking play. At times we had them on the back foot.

"There is a lot riding on next week to avoid relegation - but I have been brought here to make them work hard and restore some team spirit. I am sure we will get a result.

"With 20 minutes left, we were 2-1 up, and had a chance to make it 3-1 but missed it. We were hit by a sucker punch and our back two, who had momentum, lost it - and they equalised.

"I told them in the dressing room, that we've attacked more in the last four games than we have since Christmas. Whatever happens, if we go 1-0 down, our principles stay the same."