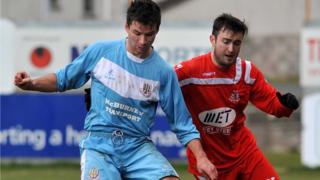 Stalemate as Ports are held by Ballymena

Portadown's hopes of snatching a top six finish in the Irish Premiership are effectively over as they drop two points at home to Ballymena.

Joe McNeill saw a shot crash off the bar and Mark Patton hit a post in the second half for Portadown.

The draw left the Ports six points behind sixth-placed Ballinamallard.