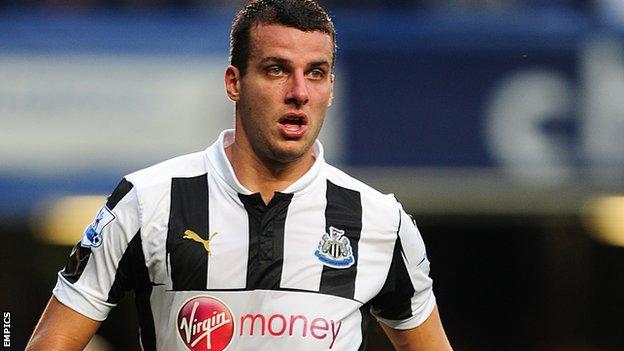 England have called up Newcastle centre-back Steven Taylor after Gary Cahill was ruled out of Friday's World Cup qualifier against San Marino.

Cahill has a knee injury but could be fit to face Montenegro on 26 March and will be reassessed before that game.

Centre-backs Michael Dawson and Rio Ferdinand have also withdrawn from the squad, with Steven Caulker and Joleon Lescott replacing them.

Tottenham winger Aaron Lennon will miss both games with a groin injury.

Tottenham's Caulker, 21, has one cap, while the uncapped Taylor, 27, was last involved in the England senior set-up when he was an unused substitute in a friendly defeat by Germany in August 2007.

"It's a dream come true," Taylor, who won 29 caps for the Under-21s, told the official Newcastle website.

"I am so happy to have received a call-up to the full squad. It is every player's ambition to represent their country and it is the greatest honour in professional football.

"If I am lucky enough to be given that chance over the next seven days it will be one of the proudest moments of my playing career."

Lennon missed Tottenham's loss to Fulham on Sunday, while Dawson was taken off at half-time with a hamstring strain.

"He is on the brink of rupturing his muscle," said Tottenham manager Andre Villas-Boas about Lennon. "He has been struggling a lot with injuries."

Dawson, who has won four international caps but has not played for his country since the 2-0 win in Wales two years ago, was substituted in the defeat against the Cottagers.

"He [Dawson] felt his [hamstring] muscle going in the first half. If we had brought him on in the second half we would be risking him a major injury," Villas-Boas added.